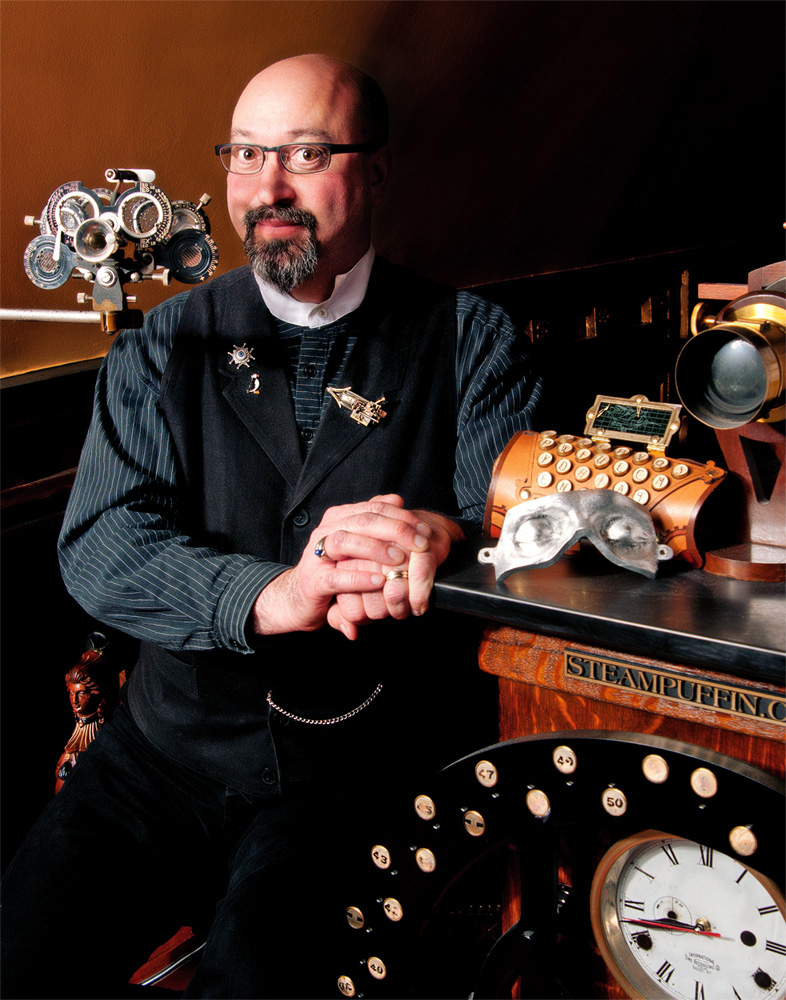 Bruce Rosenbaum is about as Steampunk as you can get. Dubbed the Steampunk Guru by the Wall Street Journal and named Steampunk Evangelist by Wired Magazine, Mr. Rosenbaum’s dedication to his craft is evident in the exquisite creative-professional works he produces.

But how does one become the Steampunk Guru? Bruce admits that when he and his wife Melanie first started ‘Steampunking’ the two of them didn’t even know there was such a term. They were just doing what they loved.

The story goes something like this: Bruce and Melanie purchased a 1901 Victorian Craftsman home in Sharon, Massachusetts in 2000 and started bringing in antiques and architectural salvage objects so they could integrate new technologies into the pieces. (For example, turning a late 1800s cast-iron wood stove into a modern electric Miele glass top stove and oven). It wasn’t until a few years later when a couple of their “Millennial” friends visited the house and told them that what they were doing was called ‘Steampunking.’ Bruce admits that at the time the term sounded equally weird and wonderful! Once the couple understood the movement — it became a lifelong passion and adventure, and ultimately, a very successful business.

What is Steampunk and where did it come from?

Bruce tells us that while there is no single ‘founder’ of Steampunk, this unique art and design movement is inspired by historical characters such as Jules Verne (who authored many books including 20,000 Leagues Under the Sea in 1870), HG Wells (author of many utopian works including The Time Machine in 1875), and electrical and mechanical engineer, and futurist Nikola Tesla. These were visionary authors and inventors who were able to ‘see’ the future to inspire others to create a new, better world.

He further explains that Steampunk fuses History + Art + Technology. At the core, Steampunk is about re-imagination and asks the question: What if the Victorian period or the Industrial age happened at the same time as our modern age? What would have been produced in inventions, innovations, gadgets, art, dress, and jewelry, etc?

Bruce elaborates the importance of Steampunk art and design in that it offers layered opportunities for thinking and learning through:

The Steampunk art and design process celebrates history, while setting a path for a reimagined better future — telling the personal stories of individuals, organizations and places.

Bruce was able to translate his love of Steampunk art and design into an immensely successful company with clients and fans all over the world. ModVic (short for Modern Victorian) takes period, repurposed, personal, and meaningful objects, and creatively infuses them with modern technology to transform them into functional art.

Bruce’s wife Melanie manages project research and design for the company, while the pair also work with many artists, craftspeople, metalworkers, woodworkers, engineers, electronics specialists, mechanics, and more – creating a specialized team of people perfectly suited to the needs and goals of each individual project.

ModVic not only builds beautiful, functional pieces but also puts focus on helping others find their own passions. Through working with kids and exposing them to SHTEAM (Science, History, Technology, Engineering, Art and Math) projects, ModVic shares the beauty of fantastical possibility with our youngest generations.

For Bruce, Steampunk is not just about pure preservation. It also illustrates a need to make the work of preservation meaningful, relevant and authentic for today’s world, culture, and sensibilities.

Bruce Rosenbaum’s Steampunk artwork has been featured in The Boston Globe, The Chicago Tribune, The New York Times, Architectural Digest, CNN, NPR and featured on MTV, A&E, HGTV, and Netflix. Currently – Bruce’s ‘Discover Steampunk‘ Museum Exhibition is on a worldwide 5-year tour premiering at the Museum of Idaho.

Learn more about Bruce at his member page on the Preservation Artisans Guild website, as well as the ModVic website.