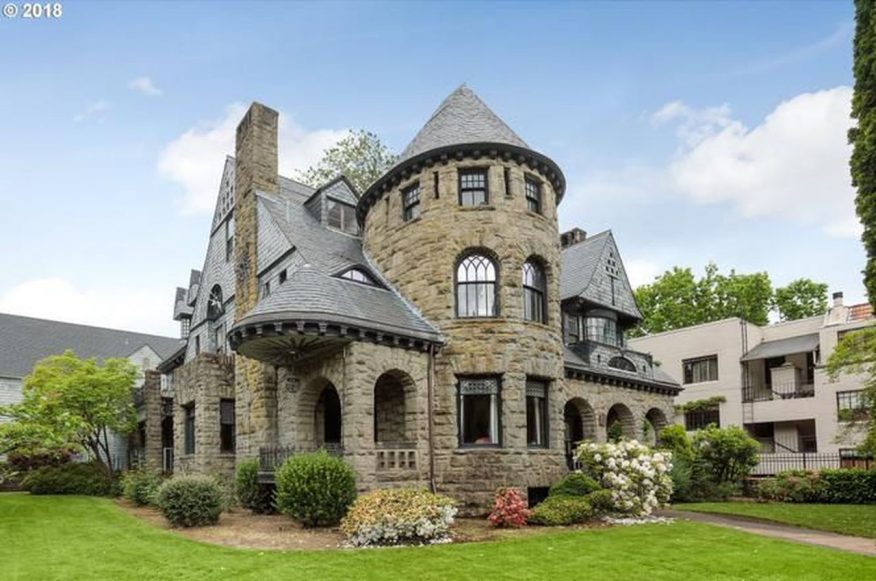 Queen Victoria reigned over Great Britain from 1837 until her death in 1901. In America, the term “Victorian Architecture” has become a catchphrase to describe any of a number of styles that were popular in the last half of the 19th century. This article will serve as an overview of these styles as expressed in Portland house design.

In 1843, business partners William Overton and Asa Lovejoy took out a 640-acre land claim on a portion of the Willamette River known as “The Clearing.” Both men thought the location halfway between Fort Vancouver and Oregon City (the Territorial Capital) would eventually produce a large and prosperous city. Overton soon sold his interest in the property to Francis William Pettygrove. Both Pettygrove and Lovejoy wanted their new city to be named after their respective hometowns in New England. A coin-toss landed the name “Portland” — Pettygrove’s home town in Maine. But our city could just have easily been named Boston!

By 1850 the new Portland, Oregon, had 800 inhabitants, a steam sawmill, a log hotel, and a newspaper — the Weekly Oregonian. The following year Portland was officially incorporated as a city. In its earliest days, Portland’s prominence was overshadowed by that of its neighbor Oregon City — 14 miles south. But Portland’s deep-water port assured that it, and not Oregon City, would eventually become the premier city of Oregon and, for a time, the largest city in the Pacific Northwest. By 1890 the city’s population had reached 50,000. But also in 1890 the transcontinental railroad reached Seattle and started the slow but steady erosion of the Rose City’s dominance of the Northwest. Portland nonetheless remained a vital and prosperous port city filled with active national and international commerce throughout the 19th century.

A visitor to Portland in its early days would have noted the stark contrast between its wilderness surroundings and the sophistication of many of its homes. Architectural pattern books provided early Portland homebuilders with plans of the latest Greek Revival and Gothic Revival styles popular in the rest of the country. Few examples of these styles remain in Portland today because the growing city’s ever-expanding commercial core devoured most of its closest-in residential neighborhoods.

Another style found in early Portland neighborhoods was the Second Empire style. This was popular nationally from 1855 until about 1880. We can assume there were examples in Portland from this same period, though we have little documentation: Only one Second Empire house remains in Portland today, the well-known Jacob Kamm House, 1871.

The year 1870 marked the fall of Napoleon III in France and also the unification of the Italian peninsula into a single nation. Popular American tastes had turned a cold shoulder to France and were now embracing all things Italian. Italianate houses became the rage throughout America. In Portland, drawings and early photographs show street after street of unified Italianate block fronts. Most of these, like the house styles that preceded them, would meet the wrecking ball to accommodate the growing downtown. There were so many Italianate houses built here, however, that the occasional survivor can still be found in neighborhoods that would have been on the urban fringe when built. Italianate houses can be identified by their somewhat exaggerated vertical composition, their long, narrow windows with segmented arched hoods, their flat or low-sloped hipped roofs, and by their strong brackets at the cornice. Portland Italianates additionally borrowed the San Francisco feature of slanted bay windows across the front façade. Elements of Italianate design persisted in Portland houses until the 1890s.

The Stick Style was popular from 1860 until the 1890s. Early Stick Style houses were very plain, consisting of horizontal and vertical boards (or “sticks”) placed on the surface of an undecorated wood-frame house. The effect was akin to the “half-timbering” found on medieval English and German houses.

There are few pure Stick Style houses left in Portland. However, there are quite a few “Stick-Eastlake” houses in almost every Victorian-era Portland neighborhood. In the 1880s and 1890s exterior wood “gingerbread” on a house mimicked the designs of the popular Eastlake Style furniture. These ornate details were often applied to an otherwise plain Stick Style house. Details might include spindle-work, lacy cutouts, or turned columns. These were all made possible by the invention of the jigsaw, the lathe, and other woodworking tools.

Middle-class families could thus adorn their dwellings with simulations of carved-wood details whose cost had previously been prohibitively expensive. Eastlake detailing was occasionally applied to small, simple cottages to make them appear grander.

To many, the epitome of Victorian architecture is the Queen Anne house. Defining characteristics of this style include asymmetrical façades, multiple gable and/or hip roof lines, patterned wood shingles, and — on the larger houses — towers, turrets, and wrap-around porches. To add even more complexity, Eastlake gingerbread was often applied to the surface as well. Queen Anne houses were built in Portland from about 1880 until the end of the century.

The Queen Anne style had pushed the complexity of house design about as far as it could go in one direction. Its often over-the-top qualities screamed out for the pendulum to swing back toward simplicity. The first reaction, the Shingle Style, first appeared as a stripped-down version of Queen Anne — albeit with an absence of ornament and an added appreciation for the beauty of simple wood shingles.

The Colonial Revival house was the most complete late-19th-century reaction to the perceived excesses of Victorian design. Colonial Revival was simple, symmetrical, and disciplined. It was only lightly ornamented — if at all. Details were simple classical motifs from the American Colonial or Federal period. Colonial Revival homes were first built in New England in the early 1880s. Portland’s first examples were built just a few years afterward. Colonial Revival is not usually regarded as a Victorian style, though its origins are clearly rooted in the Victorian age.

Further reactions to Victorian design would occur after the turn of the century. But these mostly all came after the Queen’s death in 1901. It seems quite fitting that she died so close to the end of the 19th century, thereby providing a convenient reference point for capping that long and eventful era. One hundred years from now, what name do you suppose will be given to the houses we are building today?

Jack Bookwalter, a member of Preservation Artisans Guild, is a freelance writer and architectural historian living in Portland, OR.