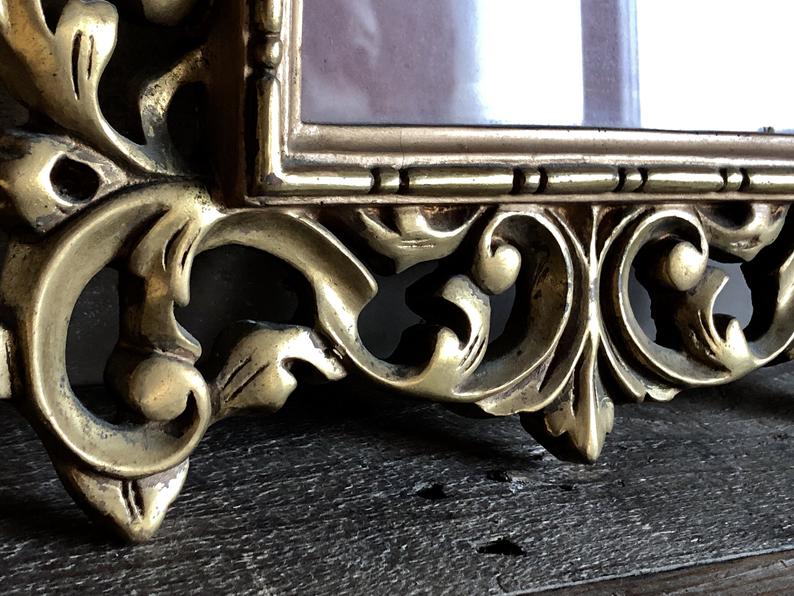 In Part One, “Care Of Your Antique Victorian Picture Frames,” we looked at how Victorian frames were made, from their molding and ornament, to the various finishing techniques used to duplicate a carved, museum-quality frame. Middle-class Americans were now able to afford these semi-productions, picture frames for their parlors.

In this part, we will examine repair techniques that preserve the integrity of the frame by using the original finishing techniques, casting for ornament losses, and doing structural repair.

Most of the natural wear on a frame appears on the top edge and the “down” side. Those are the areas that gathered the most dust and dirt, and so were wiped down most often.

In the days before central heating, coal and wood deposited a residue on furnishings, and city houses were smaller to make heating them easier. Farms had lots of space for outbuildings, so many old frames, with their paintings or ancestral portraits, were stored outside in rough, wood shelters.

Cycling humidity changes breaks down gesso and causes the wood molding to shrink and compress. The gesso cannot always conform to the reduced size of the wood molding, and since it is no longer making contact, it cracks off.

The composition ornament also can be affected by shrinking wood. There are almost always stress fractures in the compo, but it is usually still well adhered to the gesso underneath. Sometimes the cracks are quite large, and we only fill them as a cosmetic fix, using wax filler with mica powders. Rigid filler would break out as the wood continues to expand and contract in response to natural humidity changes.

If the burnished gold areas are missing leaf from over-cleaning, it is possible to clean the exposed gilder’s clay, and re-gild and burnish, using the original clay.

Sometimes there is some breakdown in the shellac covering the brass leafed compo and sides of a frame; in that case you may see some greenish areas. That is oxidation reacting to the copper in the brass leaf.

The only way to restore a frame so that it looks authentic is to use the original methods and materials used in creating the frame. The only way to maintain value and credibility in the frame is to repair only the areas of loss.

An amateur restorer might re-gild or re-paint an entire frame if he or she does not have the skills to reproduce the finish and match it to the original surface treatment. There are no shortcuts to doing a quality restoration.

The first order of business is to consolidate the gesso and ornament so those areas are stabilized. Corners are re-joined, breaks in the wood are glued up, and lost ornament is cast and fit into place. Gesso is applied warm, by brush (it’s the consistency of heavy cream), layer by layer until the needed thickness is achieved. One of the most tedious tasks for the restorer is surfacing the gesso to conform to the rest of the areas around the losses. Care is taken to lose as little of the surrounding finish as possible.

Usually we clean the entire frame at this point. We want the repaired areas to match the cleaned, not dirty, original finish.

The 23K, silver leaf, brass leaf, or gold paint is applied, whichever was originally used on the frame. The newly applied finishes are then worn mechanically to blend seamlessly with the areas around the repair areas.

Clients have their own tolerance level for an aged surface. Some want the frame to look just as it did when new, some like a very worn surface and want the repair areas to match an un-restored finish. Those considerations are entirely up to the owner’s preferences.

I like to use examples in my shop to show what the original intentions of the frame makers were. Sometimes, the wear on a frame makes the overall effect a little muddy, or monochromatic, when there should be a few areas of burnish, for punch and contrast. In the end, the owners make their own educated decisions on the final outcome of the restoration. Most people don’t know much about frames, and why should they? It’s a pretty obscure craft, and not something they need to concern themselves with until there is a problem.

Finding a Frame for Your Period Art

If you have a period painting and are in need of a period frame for it, it is possible to find an old frame and cut it down to fit the painting. Look for a frame that does not have obvious signs of damage or poorly made repairs. Sometimes damaged areas can be cut out when the frame is cut down for the painting.

It is very possible to build a Victorian frame from the ground up, using the traditional materials and techniques. We do it all the time, but it’s not inexpensive. Sometimes, a client wants a less traditional frame for an historic piece. We can make a water-gilt, closed-corner frame that complements the painting and its surroundings. I suggest that they keep the original frame in a safe place, should they decide to sell or pass the painting on.

Victorian frames are of an era when mechanical production called for many different finishing techniques, some unchanged since the Renaissance, some brand new. In many respects, restoring Victorian frames is more complicated than working with pre-1850 frames and furniture.

There is much to be appreciated in these bright, fanciful frames, made available at a reasonable cost to our emerging middle class. They grace our museums and our private collections, and are becoming scarcer every year.

Collect them when you can. Deals are still to be had at yard sales and collectibles shows, and many people still don’t realize how special they really are.