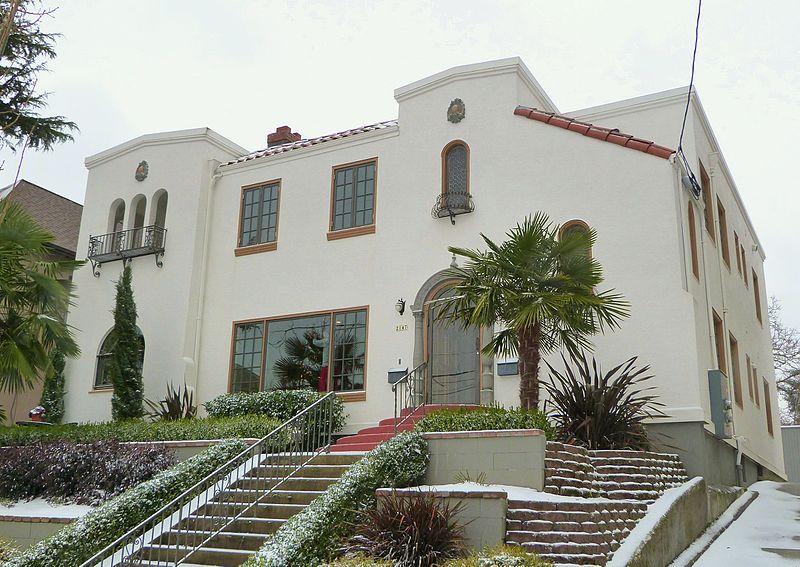 In other parts of the country, two-family homes are known variously as twin homes, attached homes, two-flats, or even double-deckers. But in Portland we just call them all duplexes. Duplexes come in two basic types: the “up and down” duplex where one unit rests atop the other, and the “side-by-side” duplex where both units share a common sidewall.

Though more common in East Coast cities, duplexes have played a part in Portland’s building history as well. In the 19th century, Victorian duplexes were constructed along with Victorian houses in the downtown and surrounding neighborhoods. Most of the original construction in this area has long since been displaced by the ever-expanding commercial downtown, but pockets of early-Portland remain. Neighborhoods such as Lair Hill, Goose Hollow, and Northwest Portland contain much of the old Victorian housing, including some fine examples of early duplexes.

After the turn of the century, large middle-class houses were often designed in the new Four-Square style. The square and regular lines of this style provided new opportunities to develop duplexes that easily mimicked single-family homes. Often, the only way to distinguish a duplex from a house was the presence of two entry doors clustered at the side of the front porch. The Four-Square style was at its peak of popularity during the five-year building boom following the Lewis and Clark Exposition of 1905. Many Four-Square duplexes were constructed in this period in the rapidly expanding inner-Eastside neighborhoods of Irvington, Buckman, and Sunnyside.

Duplexes were later built in every single-family house style that graced the 20th century. The Pre-World War II styles include Craftsman, Bungalow, Mission, Mediterranean, Dutch Colonial, Prairie, English Cottage, Storybook, and Colonial Revival. Post-War styles include the Ranch House, Mid-Century Modern, and Northwest Modern. All of these styles can be found today in duplexes built in Portland’s neighborhoods.

Many older homes have been converted to duplex use over the years, with varying degrees of architectural success. Consider the conversion photographs shown here as examples of sensitive duplex conversion. For those contemplating a duplex conversion today, appropriate zoning is usually (but not always) found within several blocks of major streets and transit stops. Additionally, an “Accessory Rental Dwelling” can be created within any single-family house on any residentially zoned land in the city. Sometimes referred to as “Granny Flats,” these smaller units are limited to 800 sq ft or a third of the floor area of the house — whichever is less. Check with the City of Portland’s Development Services Bureau for further information.

The duplex is an old idea that will prove even more popular in the years to come. With cheap energy becoming a thing of the past, we will all have to learn to live more efficiently and to live closer together. The historic duplex can show us one way of living “smarter” while at the same time preserving the look and feel of traditional neighborhoods that we all cherish. Look at the photos on this page. If the future looks as good as this, it’s going to be a good world for us all.