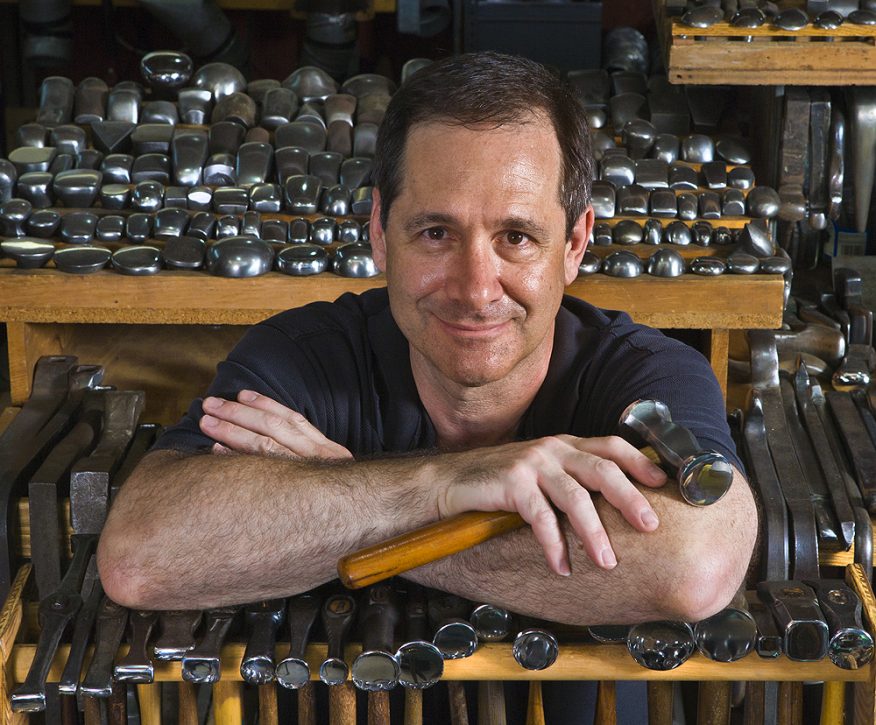 Silversmith Jeffrey Herman started his business, Herman Silver Restoration & Conservation in West Warwick, Rhode Island in 1984 and in the decades since, has garnered an international reputation for quality craftsmanship with special attention to surface finishing. Jeff is also the Executive Director of the Society of American Silversmiths.

We recently had the pleasure of chatting with Jeff, a Preservation Artisans Guild member since 2018, about how he got started in silver restoration and conservation and gathered a lovely assortment of his projects to share:

Jeffrey Herman got his start working in silver in 1976 after a family trip to Cape Cod (from their home in New Bedford) when he was only 16. During a fateful visit to a silversmith shop, young Jeffrey saw the smith creating a teapot and was immediately spellbound. Upon returning home, he found and signed up for a metalsmithing evening course at UMass Dartmouth. Within a very short time, he became the jeweler to his peers at New Bedford High School, traveling from class to class with his case of hammered and cabochon rings. Not only an artisan but also an entrepreneur at heart, he even had a business card!

After graduating with a BFA degree in silversmithing and jewelry making from Maine College of Art, Jeff was hired by Gorham as a designer, sample maker, and technical illustrator.

Jeffrey continued moving forward with his unique passion, honing his craft and taking inspiration from two key figures in American silversmithing history: 18th-century American activist and artisan Paul Revere, and John Hull (1624-1683), America’s first mint-master who also produced the first coinage from dies he made himself.

When we asked Jeff what he loves most about his work in silver restoration and conservation he shared the following sentiment:

I love all aspects of silversmithing: the history, the craft, and the business of it. I enjoy educating others as an authority on silver care; helping students through my knowledge of working in silver for 42 years; educating appraisers regarding the making of silver objects; and being a resource for all silver-related questions.

I am a steward of the art and craft of the silversmith.

It was this profound sense of stewardship that led Jeffrey to found the Society of American Silversmiths in 1989 to preserve and promote the silversmith’s art and craft.

While discussing the shift toward our easy-come-easy-go approach to housewares Jeff laments that silver has perhaps ‘lost its “luster”’ over the decades in large part due to the misconceptions around the amount of care it requires. He counters that when properly maintained, silver may NEVER need additional maintenance other than the occasional cleaning (not polishing).

Jeff further explains that although all of the large silver companies around the world have essentially disappeared there are now numerous vibrant small shops that have taken their place. It’s still a thriving craft, but the importance and benefit of eating and drinking from silver (which is antimicrobial and antibacterial) is largely lost on the younger generations.

As a result and in gentle defense of this age-old craft, Jeff spends an inordinate amount of time promoting the art of silversmithing as well as his fellow American silver artisans. He worries about what an (increasingly near) American future without the option to find a local artisan to create a simple sugar spoon or goblet. He strives against a future where we won’t be able to find a qualified, local smith to remove the dents from an otherwise beautiful, functional vintage silver coffeepot – further contributing to the growing toss-it mentality in our big-box society. It makes no sense to Jeffrey Herman that in a country with such a large population that we should be forced to find a silversmith in England for silver restoration and conservation services.

With American home interiors looking more and more the same, stocked with craftless items from megastores like IKEA, Jeff’s public outreach includes encouragement to buyers of contemporary silver to commission a true artisan to forge a beautiful sugar spoon, butter spreader, baby spoon, or letter opener. Understanding that not everyone can afford an entire handmade tea set or candelabra, Jeff advises buyers to start small by investing in a single piece of silver made by a pair of experienced hands. This singular object, whether designed by the client or the silversmith, will be far more appreciated and beautiful than a factory-stamped, mass-produced piece of flatware.

Jeffrey Herman has restored, reconstructed, and hand-finished everything from inexpensive disposal-damaged and dishwasher-dulled flatware to major surgery on historically important tankards, tureens, and tea services. He’s the first one to admit he is ‘obsessive’ about his work, as illustrated in the before and after photos from just a handful of Jeff’s projects shared below:

Learn more about working with Jeffrey Herman and get more information about the services he offers by visiting his Preservation Artisans Guild member page, and his extensive website.