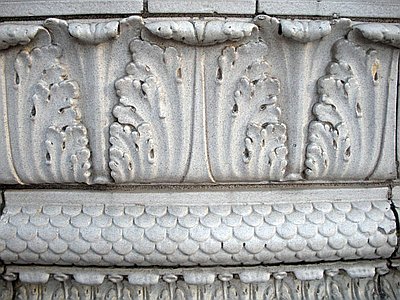 Downtown Portland, Oregon has a wealth of beautiful terra cotta buildings, most dating from the first three decades of the 20th century. A number of factors came together in this period to produce this abundance of terra cotta in our city. First of all, the invention of the elevator and steel framing allowed buildings to be built much higher than had ever been possible before.

Traditional building materials such as brick, stone, and cast iron would have proved to be too expensive, heavy, and/or clumsy to accommodate these taller buildings. Terra cotta weighed just a fraction of the weight of stone, for instance, and the terra cotta molds could be used over and over again. Also, the light-colored glazing on terra cotta better suited the mood of the new century. The 1893 Columbian Exhibition in Chicago, also known as the Chicago World’s Fair, had ushered in the era of the Neo-Classical “White City.” Gone were the dark and heavy Victorian stone buildings of the Richardsonian Romanesque period. Every American city would be a “City Beautiful” based on design principles found in ancient Greek and Roman temples.

Portland had its own smaller version of the Chicago fair in the Lewis and Clark Exhibition of 1905. For the first time ever, Portland opened itself to the eyes of the world. People came to the fair from all over. Many stayed. The period 1905 until World War I (1917) was an era of unprecedented growth for our city. If we seem to have a larger percentage of terra cotta buildings than other cities, it’s mostly because we grew so fast in this era of terra cotta’s peak popularity.

The 1920s saw another period of rapid growth for Portland. Many downtown office buildings were constructed in this era, but terra cotta was used less. The fact that terra cotta office buildings persisted at all in Portland is largely due to the strong classical leanings of architect A.E. Doyle. At the beginning of the 1920s Doyle had the largest and most respected architectural firm in the city. He designed or collaborated in the design of thirteen of the terra cotta buildings that remain today — far more than any other single architect. Terra cotta remained a popular building material for new institutional and residential uses during this time.

Exactly what IS terra cotta? Literally, the Latin translation means “burnt earth.” It is, essentially, fine grade clay that has been hard-baked in an oven. It is similar to brick but made of a finer grade clay and fired at a higher temperature. Unglazed terra cotta has been around since at least Roman times, but it took the development of special glazing compounds in the 1890s to produce the kind of smooth, shell-like surface that we now associate with architectural terra cotta. Also, new oven technologies around this time produced more consistent and controllable heat. Terra cotta was often baked at high temperatures for as long as six days. Terra cotta is often referred to as “handcrafted” because the clay was hand-packed into the molds. Also, the glazing was hand-sprayed (sometimes hand-painted) on the terra cotta surface prior to being fired in the oven.

The largest producer of terra cotta on the West Coast was Gladding McBean & Co. of Lincoln, CA. Much, if not most, of the terra cotta in downtown Portland buildings came from this one company. It is still in business, producing a variety of clay-based products. Its workload has actually expanded in recent years to accommodate the new-found interest in restoring century-old terra cotta buildings.

Another company that provided terra cotta for Portland buildings was N. Clark & Co. of Alameda, CA. Nehemiah Clark was a 19th-century potter who came west to work in the California goldfields. He found no gold, but he made his fortune by discovering one of the finest clay fields in the country. Other, smaller terra cotta firms were located in Washington state. Apparently none ever existed in Oregon.

Portland’s terra cotta buildings are one of the under-rated visual delights of our city. Part of this problem lies in the fact that much of the terra cotta is found above street level. We usually have to make the effort to look up from the sidewalk. Our busy lives condition us to move quickly and not discover the (slightly) hidden beauty all around us. For those who do make the effort, however, the reward is a virtual terra cotta art museum in the sky.