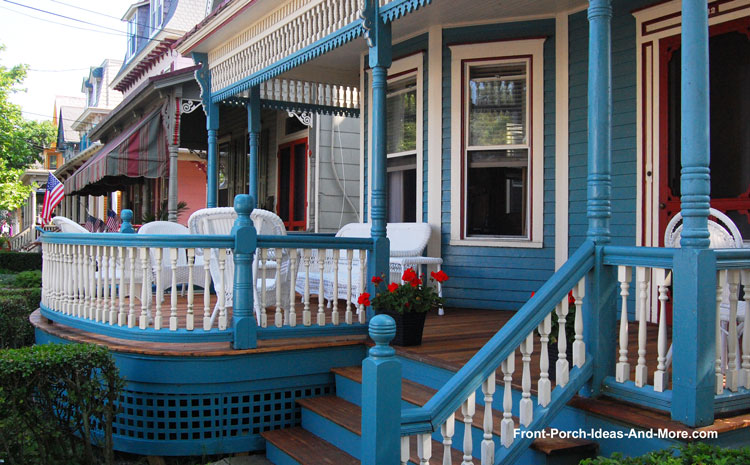 No one knows for sure when the first porch was invented, but it’s safe to say that porches have existed – in one form or another – since humans first built habitable shelters. Porch technology did not evolve in steady stages around the globe, however. Ancient kingdoms in Africa had relatively sophisticated concepts of indoor-outdoor living at the same time that European hovels tried as much as possible to shut out the cruel world beyond. It would take several millennia and much intermingling of world cultures to produce the classic American front porch of the late 19th and early 20th centuries.

Some historians attribute the origins of the American porch to the covered porticos of classical Rome. Indeed, our word “porch” derives from the Latin portico. However, these colonnaded spaces were almost always connected to public or religious structures. The portico on Thomas Jefferson’s Monticello (as depicted on the reverse side of our nickel coin) would have been a rare sight in ancient Rome.

The loggias of Renaissance Venice perhaps provide a better starting point for the evolution of the American-style porch. Loggias were recessed front entryways built into the ground floor of Venetian canal houses. This architectural feature later became popularized throughout Europe by the 17th-century Venetian architect Andrea Palladio (yes, the very same of Palladian window fame). Eventually, the English who had come to view Palladian neo-classicism as proper British architecture would spread the loggia to the American colonies. Sometimes the loggia was called the piazza — a term still used in Boston, Charleston, South Carolina, and Maritime Canada.

Other nationalities and cultures contributed to early American porch design as well. The Spanish, and later the French, developed galleries in New Orleans to provide shade and air circulation in that hot, humid climate. The galleries were actually of African origin, having been brought over by slaves to Brazil and the Caribbean. European plantation owners quickly saw the advantages of the African-style houses the slaves had built for themselves.

The Dutch added the front stoep (stoop) to the porch mix. The Spanish had been building portals in New Mexico and the Southwest for many years. The Indians of Bengal contributed the wide-eaved barandas (verandas) surrounding their bangglos (bungalows). Clearly, the porch’s pedigree amounted to a vast intermingling of all the world’s peoples — a heritage befitting the increasingly diverse young American republic.

The glory days of the American porch did not occur until the late 19th and early 20th Centuries. Nearly every house design in the parade of styles between 1870 and the First World War featured prominent front porches. The era “Between the Wars” (i.e. 1918-1940) saw the slow decline of the American porch. By the post-World War II housing boom, the porch party was finally over. In the past several years, however, front porches
have gained a new appreciation from a devoted following. It is quite possible that we are embarking on a renaissance of the classical American porch.

The Victorian porch played a prominent role in that era’s complex code of behavior. The porch was the most public part of the house: the place where the family displayed their decorum, their status, and their sense of style. The backyard may have been a toxic stew of outhouse, stable, coal, and ash refuse, but the impression made by the conspicuous front porch was a more important source of information about the household.

Victorian porches often contained spindle work, lacy cut-outs, and turned columns and posts. These were made possible by the invention of the jigsaw, the lathe, and other woodworking tools. Middle-class families could then adorn their dwellings with simulations of heretofore prohibitively expensive carved-wood details. In the 1880s and 1890s, this exterior “gingerbread” mimicked the designs of the popular Eastlake style furniture. These features can still be seen on some porches in the oldest of Portland’s neighborhoods (i.e. Northwest Portland, Inner Southeast, and Lair Hill, among others).

A far more common Portland house style is the American Four-Square, built here in Portland, Oregon in great numbers between 1905 and the First World War. This was the boom era for Portland following the successful Lewis and Clark Exposition of 1905. Every older Portland neighborhood has many examples of this style. The wide, substantial front porch was usually the most conspicuous design feature in an otherwise plain, almost cube-shaped house. The Four-Square’s simplicity was the antithesis of the Victorian era’s ornate fussiness. The function of the porch had changed as well.

The new century had ushered in new ideas of informality. Porches became less for show and more for the enjoyment of family life. Porch furniture actually started to look halfway comfortable. This was the heyday of the porch swing. Four-Square entranceways were usually skewed to one side of the porch to allow for a more efficient use of porch furniture. Doric style Greek columns often supported the porch roof. The simplest of all Classical Greek columns was befitting for this new simple American house style. Occasionally, a Four-Square porch contained the more complicated Ionic or Corinthian Greek columns — perhaps an expression of yearning for the more ornate Victorian past.

The Craftsman/Bungalow style house, built at approximately the same time as the Four-Square, added an element of rusticity to the Four-Square’s concept of informality. The Craftsman philosophy — part of the larger Arts and Crafts movement — stressed a renewed connection with nature and living an outdoor life as much as possible. Instead of the delicate Doric columns of the Four-Square, the Bungalow porch was supported by massive boxed-in wood columns — frequently battered (that is, tapered). Bungalow porch furniture could be extremely rustic — sometimes even made from unpainted bent twigs. The bungalow is probably the most common pre-World War II house style in Portland. Craftsman houses are, essentially, larger two-story bungalows.

While not as common in Portland, the Prairie House had quite a visual impact where it was built. These houses reflected the broad horizontal lines of the Midwestern prairie; Frank Lloyd Wright designed the first Prairie houses in Chicago around 1900. Prairie porches are characterized by their extremely wide eaves and overhangs and their overall horizontal sweep.

The gradual demise of the American front porch occurred in the 1920s through 1930s. As streets became noisier with more automobiles, families began retreating more toward the rear of the house. The backyard’s unpleasant association with the outhouse disappeared once nearly all urban houses were fitted (or retro-fitted) with indoor plumbing. Virtually none of the new house styles built after World War II offered front porches.

There has been a renewed interest in the front porch in recent years. Many people have begun to realize that the sense of community encouraged by the front porch is a valuable component of a city’s livability. Communities with an active porch culture have experienced lower crime rates. A street with “many eyes” is going to be a safe street. Many new suburban houses sport front porches in much the same manner as their urban historical counterparts. It is quite possible that we are on the brink — in Portland and in the nation — of a whole new era of the American front porch.