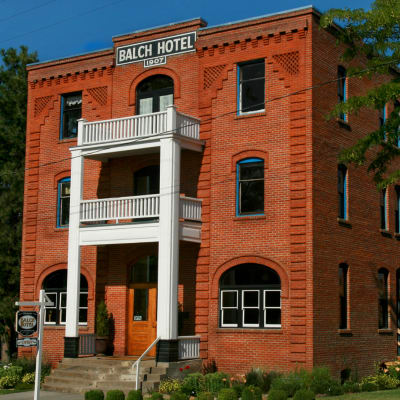 When Samantha and Jeff Irwin first laid eyes on the historic Balch Hotel, they fell in love with it and knew this unique property had potential. Raised in the Hood River, Oregon area, they were familiar with the beauty that the Dufur Valley offered. Without prior construction or hospitality experience, they bought the Balch Hotel.

Built in 1907, the Balch Hotel had been a charming stop for weary travelers over the decades. Located in the rolling hills of Dufur Valley, it’s just one hour and forty minutes east of Portland, OR. Whether traveling from Portland, Bend, or the Pendleton area you will see some of Oregon’s most beautiful scenery. Rolling farming fields of golden wheat and green alfalfa surround the Balch Hotel. Sunny days are plentiful, making it an excellent location for outdoor weddings, reunions, or other events in spring, summer, and fall.

Charles P. Balch, a local rancher, and druggist owning approximately 1,600 acres around Dufur built the hotel. The bricks used to build the hotel were made on his ranch. The 18-inch-thick brick walls keep the building cool during the hot Dufur summers and warm on those cold winter nights. It opened on January 17, 1908, and a 100-year anniversary celebration was held in 2018.

When the hotel first opened, room rates were as low as fifty cents a night and amenities included hot water, electricity, and steam heat: all state-of-the-art for the first part of the twentieth century.

Frank and Ethel Ingel purchased the hotel in 1914, and they operated it until the 1940s. The hotel was sold and used as an apartment and rooming house, and then as a private residence until it was once again sold. Howard and Patricia Green of Portland, OR, purchased the hotel in 1988. The Greens worked many years restoring and repairing the hotel, from fixing the brickwork to adding individual bathrooms in the south facing rooms. In 2006 they sold the hotel to the Irwins, and Jeff and Samantha are dedicated to continuing the Greens’ work of restoring the grandeur of the hotel. Samantha said, “stripping the woodwork in the lobby and shopping for vintage furnishing at local antique stores was our first priority.”

We asked the Irwins if they ever felt they took on more than they could handle. According to Jeff, he felt they had, but Samantha claimed that God had opened a door, and she felt that the hotel is where they’re supposed to be. “The local community was so supportive and encouraging that we both knew that our efforts were being appreciated.”

This three-story brick hotel has 19 bedrooms and a suite on the third floor boasting a magnificent view of Mt. Hood and a private bath with a whirlpool tub. All of the rooms are furnished with period antiques. There are no elevators in the hotel at this time. There are also no televisions or phones in the rooms. “They are just out of place with the period décor; however, we do offer wireless Internet access for those who need to stay connected,” said Samantha.

Rooms on the south side of the hotel have private baths, and rooms on the north share common baths. Original fire hoses hang in the hallways, and an old electric meter is in its original location on the second floor. When electricity came to the Dufur Valley, the first two businesses to use it were the Balch Hotel and the lumberyard. They shared it, and each had electricity for 12 hours a day: The lumberyard during the 12 hours of daylight and the hotel during the evening hours.

Whether you lounge in the parlor, relax in the lobby or stroll the newly landscaped grounds, time spent at the hotel will leave you rested and rejuvenated. There are a myriad of day trips in the surrounding area that are sure to fit your interest. Activities to enjoy include visiting local wineries and historical museums, golfing, hiking, shopping, biking, rafting, and fishing, just to mention a few.

Asked if they had to do it over, would they do it again, Jeff claimed “Yes. I would hesitate; it’s been more work and stress than I thought, but I would do it again. It’s been very rewarding.” Samantha’s answer was just one word: “Absolutely.”