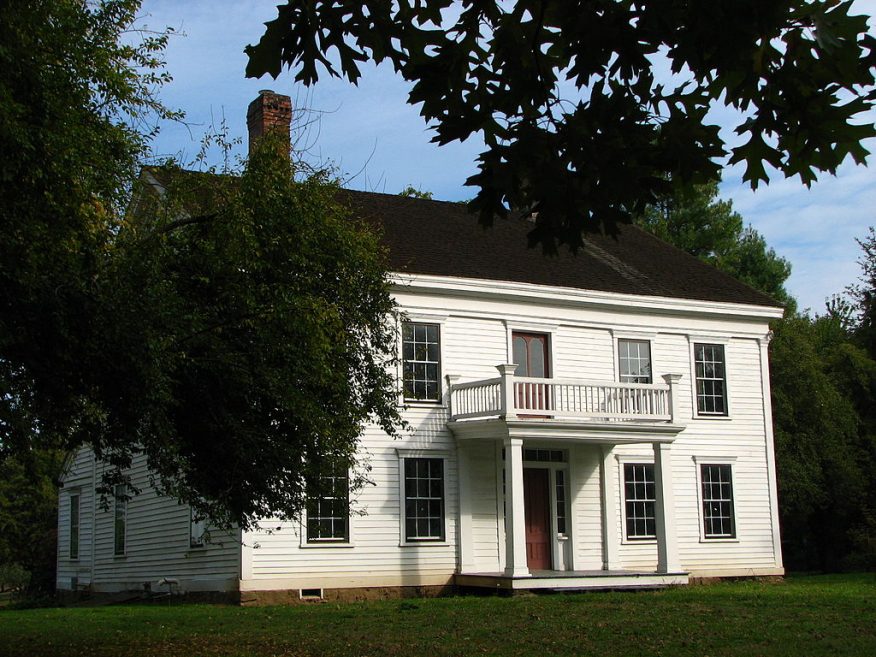 Greek Revival was the dominant house style in America from 1820 until some time after the Civil War (1861-1865). Elements of Greek Revival design, however, persisted through the Victorian era and into the 20th century. Because the young state of Oregon was sparsely settled in the mid-19th century, comparatively few Greek Revival houses were constructed here. Yet surprisingly many have survived intact to the present day, most notably in the smaller towns and rural areas of the state.

Many Willamette Valley settlers built Greek Revival homes that were similar to those in their native New England. Settlers of the city of Portland also built Greek Revival houses, but over the years, the ever-expanding commercial downtown all but wiped out these early neighborhoods. Today, the architectural mix of old Portland houses (including Greek Revival) can best be experienced by visiting historic Oregon City, never quite the economic boomtown of its neighbor to the north.

Why did America take the Greek Revival style to its heart for the greater part of the 19th century? First of all, the seven-year struggle for Greek independence from the Ottoman Turks (1821-1828) was widely publicized in this country. America’s sympathies were strongly with the Greek people, seen as the inheritors of the world’s first democracy. Ancient Greek art, literature, and philosophy, even Greek furniture design, became in vogue in this period. The new Greek letter societies on American campuses (the forerunners of today’s fraternities and sororities) furthered the fascination with all things Greek.

After Greece achieved full independence in 1829, the previously closed country became open to archeologists, scholars, architects, and indeed anyone who had the time and money to visit. Ancient Greek buildings were re-discovered by the West (regrettably, many artifacts were also “re-appropriated” to other countries during this period). Drawings of Ancient Greek monuments and buildings were published and widely distributed. Pattern books of Greek Revival houses made constructing an accurate Greek Revival house as easy to build in Illinois or Oregon as it was in New England or upstate New York.

What exactly makes a house uniquely Greek Revival? Sometimes it’s easy to tell: Grand houses with two-story columns that look like the Parthenon are obvious (think “Tara” in Gone With the Wind). Modest houses incorporate Greek Revival elements more subtly. The one feature that unites all Greek Revival houses is the triangular “pedimented” gable (look at the triangular pediment above the grand columns of the Ainsworth house pictured in this article for a clear example). Sometimes a similar, column-less gable is found on the side of the house instead of the front. Sometimes the bottom segment of the triangle is merely suggested by a “return” cornice. But it is always there. Also, the ornamentation on a Greek Revival house is more sparse than other 19th-century styles. The beauty of the structure comes largely from the elegance of its form and proportions, not from any applied decoration.

Once you begin to recognize Greek Revival, you may realize that the countryside farmhouse you never thought much about actually has a proud design history going back thousands of years.

A Tale of Two Cousins

In 1849 cousins William and James Bybee left their Kentucky homes to try their luck in the California gold fields. Unlike most of the miners, the two cousins actually found enough gold to finance a comfortable lifestyle for themselves. By 1854 William had built a stately Greek Revival house on 5,000 acres of land outside Jacksonville (near Medford). In 1856 James followed his cousin to the Oregon Territory and built an almost-identical Greek Revival house on Sauvie Island. Both cousins became prominent early-Oregon businessmen and both partook of the gentlemanly hobby of horse breeding. After becoming one of the first Commissioners of Multnomah County, James moved to Sellwood (then a separate municipality from Portland). Present-day Bybee Boulevard in the Sellwood district is named after him.