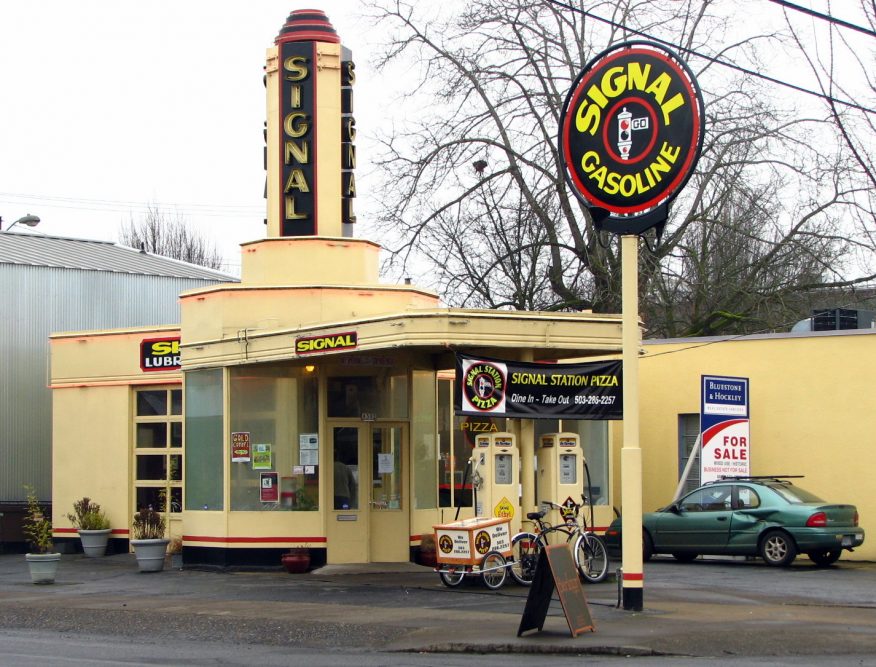 One of Portland’s most successful restorations in the past decade has been the Signal Gas Station in the St. Johns neighborhood. A number of years ago, developer Rob Phillips, owner of Renovation Properties, had been searching for an antique gas station to restore. A classic car enthusiast as well as historic building contractor, Phillips wanted to create a completely authentic backdrop to showcase his and other’s antique automobiles. When a many-times remodeled St. Johns florist shop came on the market in 2002, Phillips recognized it as having the “bones” of a 1930s Signal Gas Station. For the next nine months, Phillips carefully documented and re-created even the most minute details of the building’s original appearance. When it was finished in 2003 it looked every bit as magnificent as it did on opening day June 2, 1939.

Recreating the building’s exact 1930s detailing was tedious, time-consuming, and took a lot of hard work, especially since no original photographs of the station existed. But Phillips also encountered a few instances of good fortune along the way. For example, when the plywood panels were pulled off the florist tower, its original “wedding cake” top popped up in all of its art-deco glory.

Phillips was also able to make good use of “clues” he discovered in the building. The lack of maintenance over the years had left some original unpainted steel panels revealing “shadows” of signage placement. These panels also indicated the building’s original colors. In addition, Phillips deduced that the lines of tiny holes in the sheet metal façade indicated the exact placement of the neon tubing that had once encircled the building. During the restoration, Phillips also came into possession of a 1930s specification book from Signal Gas Co. From this, he was able to re-create the exact letters and colors of the 1930s signage. The large pole sign on the street was re-created from the spec book as well. The refurbished Signal Gas pumps are original to the building.

This restoration example illustrates how going the extra mile to research and document authentic detailing can pay off in superior results. Phillips has provided a gift to the St. Johns neighborhood as well as to the larger Portland area architectural community. Art Deco enthusiasts from as far afield as Los Angeles and New York have come to marvel at the streamlined, geometric lines of this classic “art modern” building (art modern being the more streamlined 1930s version of 1920s art deco.) Viewing the station’s neon outline at night has become especially popular, often in conjunction with a trip to the nearby Interstate Avenue Historic Neon District.

Phillips indicated that he found this restoration project so satisfying that he is looking for another antique gas station to restore. Restored gas stations can be re-used in a number of ways. The St. Johns Signal Station (no longer in Phillips’s ownership) has served as a pizza parlor through the more recent years.

A distinctive building is always a good way to attract business.