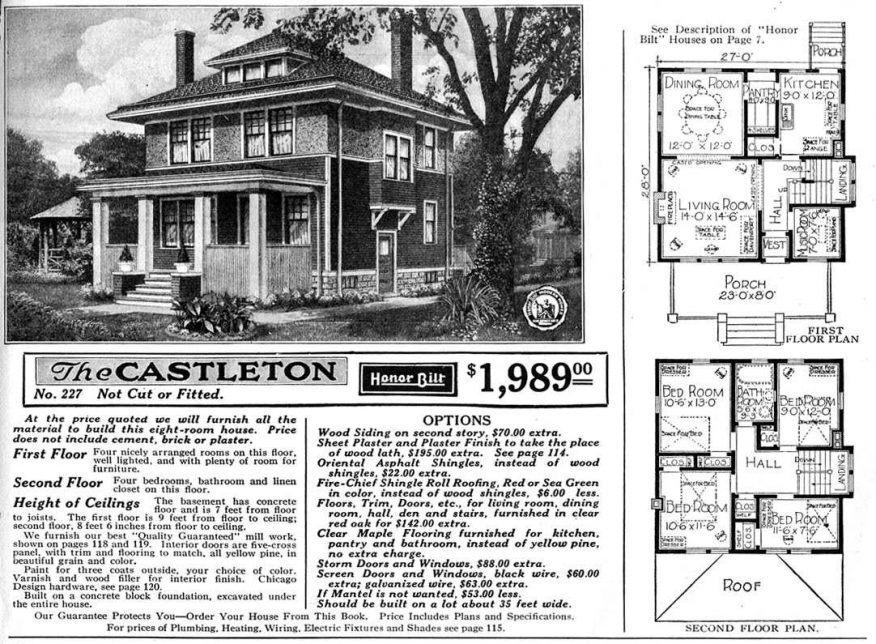 Could your early-20th century home possibly have been one of the now infamous mail-order houses that was selected from a catalog and purchased by mail?

As unusual as it might seem today, many older houses in Portland — and across the nation — were built in just such a fashion. After financing had been arranged and the order form sent in, homebuyers could expect to receive their new home in about one or two months. The home would not, of course, arrive all in one piece in the mailbox. Rather it would arrive in 30,000 pieces — not including nails and screws — in two boxcar loads at the nearest railway station.

From there the mail-order house components would be hauled to the building site and assembled by a local builder or carpenter. The resulting completed house was virtually indistinguishable from its more conventional stick-built neighbors. The vast majority of these “pre-cut” homes were of the highest quality and provided excellent value to the purchaser. Indeed, these houses have stood the test of time and have held up as well or better than houses of a more conventional origin.

The largest of the firms producing mail-order houses was Sears Roebuck & Co. Yes, the same Sears Roebuck that produced those giant catalogs many of us grew up with. In its early years, the company’s success was nothing short of phenomenal. Between its inception in 1908 and the Wall Street crash of 1929, Sears had produced a remarkable 100,000 houses! Only 5,000 or so have been identified and documented today. After struggling through the depression years, Sears’ “Modern Home” division finally called it quits in 1940.

Although most of Sears’ mail-order houses were produced and distributed east of the Mississippi River, the sheer volume of production would suggest that at least some of them made their way to Portland. Sears had shipped houses to England, Australia, and even to India; delivery to Portland would have been comparatively easy. All that was needed was access to a rail connection, and Oregon and Southwest Washington had plenty of these. Portland’s population boomed in the two and a half decades following the Lewis and Clark Exhibition of 1905. Many of these newcomers were from the Midwest, where Sears’ trusted name had long produced a loyal and enthusiastic customer base. It is quite conceivable that some of these newcomers — or someone that they knew — had already owned a Sears home before they moved west. A few local examples have been identified so far.

The second-most popular mail-order home company was Aladdin Homes of Bay City, Michigan. Although not as prolific as Sears overall, they probably actually accounted for more homes in Portland because the company’s Western regional factory was located in Kenton, Oregon. It was said of the Columbia River facility that logs rolled in the back side of the plant and left a few days later as complete houses. Aladdin Homes operated between 1906 and 1954. The company claimed to have invented mail-order houses, as they had produced the first house catalog two years before Sears. Sears had begun selling house-part components 10 years earlier, in its 1896 catalog, but Aladdin was the first to put all the house parts together as a marketable home, packaged and presented to the home-buying public.

Third in the national mail-order market was the Gordon Van Tine Company of Davenport, Iowa. There were likely some Van Tine houses constructed in Portland as well. Like Aladdin before them, the company knew that to adequately serve the West, a large factory had to be located in the West. Their plant and distribution center in Chehalis, Washington, sent pre-cut houses to all areas west of the Mississippi River. A perusal of their early catalogs shows a preponderance of just the type of house styles especially favored by Portlanders: Four-Square, Craftsman, and Bungalows, many with the massive beams, oversized bargeboards, and liberal use of rustic cedar shingles that we still see throughout our older neighborhoods. On almost every page, today’s Portland reader could exclaim, “I have SEEN this house! Somewhere…”

Montgomery Ward — that other company producing mail-order houses showcased in a thick catalog — also tried their hand at the national market. However, their “Wardway Homes” never approached the popularity of homes from their rival, Sears.

Several local firms produced mail-order houses as well. Perhaps the best known of these was The Fenner Company/ Redi Built Company. This company operated between 1911 and 1927. Although they shipped houses to all of North America, they were best known in Portland as a company one could sit down with and devise custom house plans to suit individual needs. Today, Fenner homes can be found in many older Portland neighborhoods in a variety of sizes and styles.

One the easiest ways for the homeowner to determine mail-order house origin is to check the lumber ends of an unfinished part of the house, such as the basement or attic. If there are letters and numbers written there, this could indicate a reference code for assembly purposes. Not all mail-order houses were so marked, however. A search of trademarks on original plumbing and lighting fixtures and on miscellaneous hardware (hinges, doorknobs, etc) can often turn up important clues. Deed research is another avenue of exploration. Perhaps the best way of starting an investigation, though, is simply to ask your neighbors. Mail-order houses are often part of a neighborhood’s oral history, passed down through word-of-mouth over the years.

Mail-order houses are part of the architectural heritage of Portland and the nation. Though they rarely created cutting-edge designs, they show us today the history of established architectural tastes of generations of Americans. The importance of historical study and research on these houses is just now beginning to be realized. Only a small fraction of these remarkable homes have been identified. Current research efforts may uncover many more.