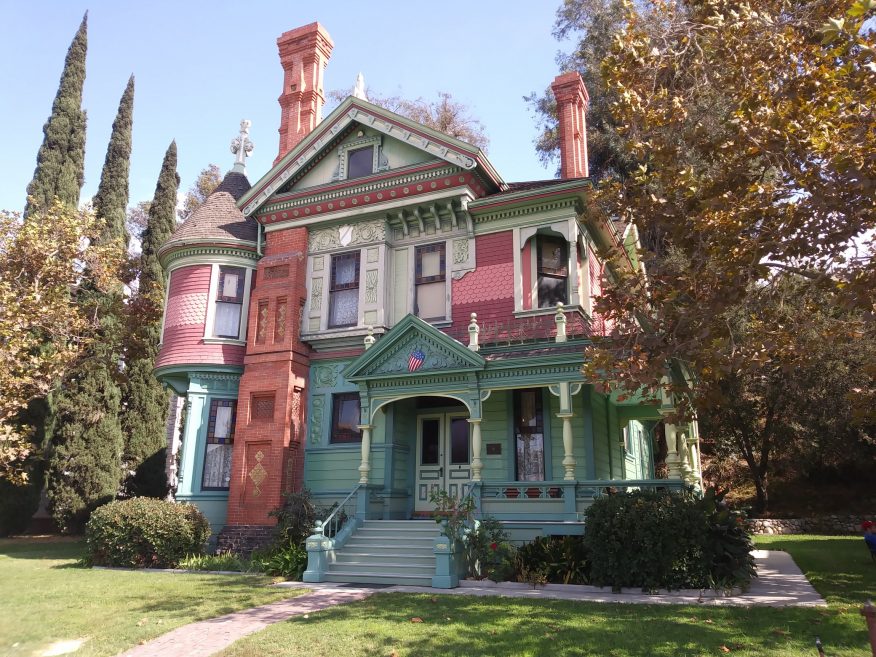 If you still are in the mood to seek out more Victorian buildings, check out Heritage Square, in the Los Angeles neighborhood of Highland Park, just across the Pasadena city line to the west. It is a collection of eleven Victorian buildings moved there from other parts of L.A… mostly from Bunker Hill and other inner-city neighborhoods that became downtown’s high-rise zone.

I have mixed feelings about “heritage parks”. Sometimes they are little more than architectural “petting zoos” and it is always better to preserve a building in place rather than move it where it loses its context. However, there are some instances where demolition is inevitable and moving the structure becomes a viable alternative.

As far as preservation parks go, Heritage Square is the best I have seen. Here’s why:

1) All the buildings have been lovingly (and accurately) restored.– inside and out. In some cases they have gone to almost unbelievable efforts to maintain accuracy. Some houses, for instance, have had their original landscape features transplanted en masse to the new site (including one large, magnificent coral tree). Now THAT’S dedication.

2) Knowledgeable guides in period dress lead you through all the houses and buildings. Where possible, the houses are furnished with the original family heirlooms and object . You feel you really know the family of each house by the time you have finished touring.

3) All of the structures are of the same time period (late Victorian), so there is a consistency of history and design. They are placed on lots on a city “street” so they appear in a setting similar to where they were first built. There are eight houses, a lovingly-restored  (and fully stocked) pharmacy, a church, and a depot. They all fit together in a setting that seems “real”.

Additionally, Heritage Square is just across the Arroyo from the wonderful stone-and-wood 1897 El Alisal, the residence of Charles Lummis. Lummis was a writer, editor of the L.A.Times, city librarian, historian, world traveler, and strong promoter of Native American rights. There are those who would argue he was the founder of the eventual Pasadena style that became known as Craftsman. When you tour his artistically rustic wood-and-stone house (now an L.A. City museum) the influence seems undeniable

The photos in this post show some of Heritage Square’s variety of Victorian styles including Queen Ann, Stick-Eastlake, Italianate, and even an “Octagon House”. The stone house is El Alisal.

Coming up next in the series on Victorian Homes in Pasadena: The Lucky Baldwin Estate.