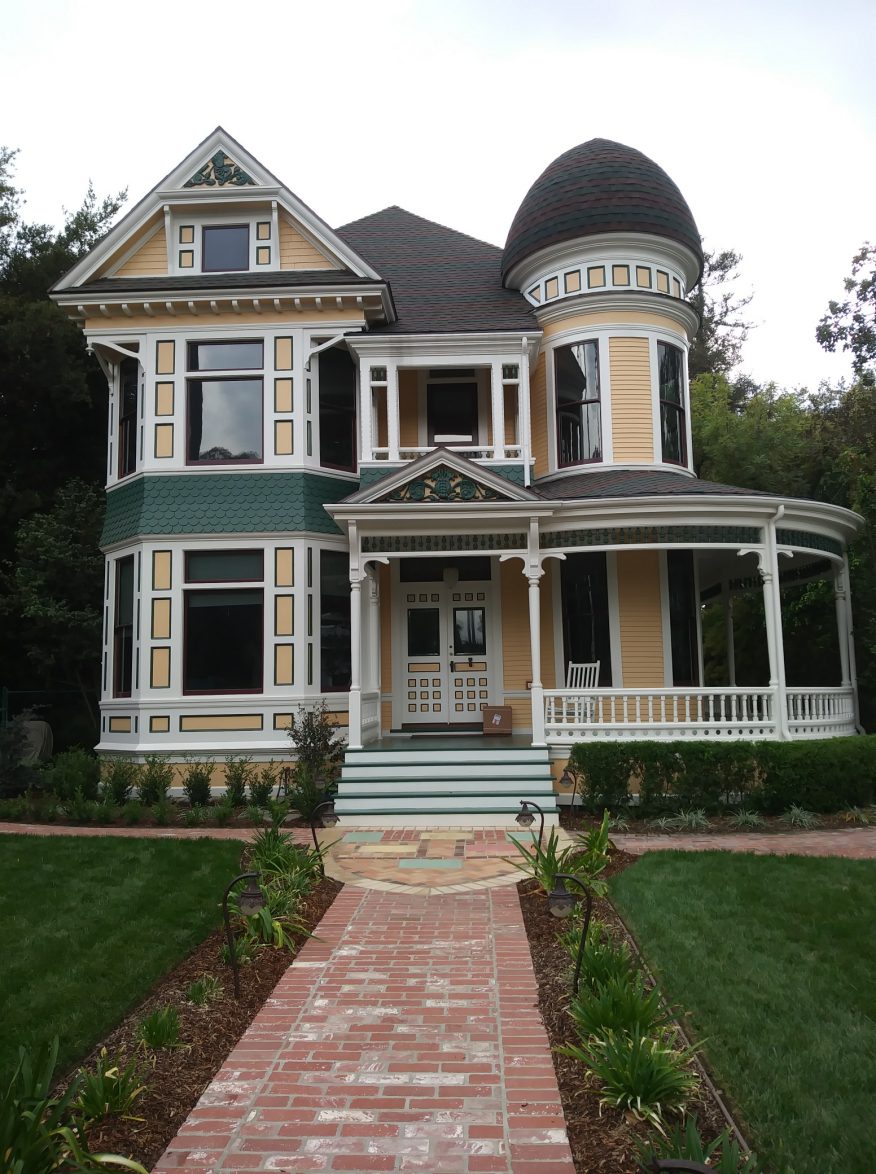 PAG member Jack Bookwalter, our Architectural Historian, spent a week in Pasadena last month exploring that city’s unheralded Victorian design legacy. Here’s the first of three articles he wrote to share these beautiful homes with us:

Although Pasadena is best known for its early 20th Century Craftsman houses, there is also a surprising layer of Victorian-era buildings underlying it all. Pasadena (then known as the Indiana Colony) was incorporated in 1874, a full quarter century before the first Craftsman houses started popping up alongside the famous Arroyo Canyon.

The new city quickly became a booming rail and agricultural center. Wealthy snowbirds from the East Coast and Midwest began building winter houses there. Certainly, there must be a wealth of Victorian buildings to discover. The big question was: Where were they all? A casual drive through city streets revealed nothing but bungalows, bungalows, bungalows. But a Google search revealed that three of Pasadena’s sixteen historic districts contain sizable numbers of pre-1900 buildings.

Perhaps the highest concentration of Victorian houses can be found in the side streets off Orange Grove Boulevard (Markham Historic District). This major thoroughfare itself was at one time lined with Victorian mansions. Locals referred to it as “Millionaire’s Row“. Today, only the Wrigley Mansion stands as a testament to loftier times. Shortly after World War II, the mansions were slowly demolished and replaced with garden apartments. Now, before you get your preservationist rankles up, it should be noted the replacement apartments were of a superior landscape and design standard — most of them we would now call “Mid-Century Modern”. Indeed, THESE buildings are now considered historic and treasured, and architects and planners from all over the world flock to see what is considered a successful example of high-density urban development. (Author side note: Portland, Oregon should be so lucky, considering the amount of schlocky redevelopment we are experiencing right now.)

All is not lost, however, for grieving fans of lost Orange Grove Victoriana. The single-family zoning on either side of Orange Grove Boulevard was retained to the present day. Though not as grand as the over-the-top Boulevard mansions, most of these side-street homes were built in the Victorian era for a solidly upper-middle-class clientele. They have all been lovingly maintained or restored.

Many other Pasadena neighborhoods contain scattered examples of Victorian housing as well. Many no doubt were the original orange grove farmhouses that just remained in place while the area grew up around it. Others have more cryptic origins. As I was admiring a handsome Victorian in a 20th Century neighborhood, a neighbor enlightened me that the house had been moved there from a part of town undergoing road-widening many years before. He said other houses in the area were likewise moved to their sites. Interesting angle. There are a thousand stories in the Naked City… this was one of them.

“Old Pasadena” is a collection of largely Victorian and Post-Victorian commercial buildings on the edge of downtown. It is a lively, prosperous pedestrian area filled with non-chain specialty stores and restaurants. It serves as a testament to the principle that preservation can be GOOD for business.

(More of our city leaders in Portland need to revisit this principal.)

Coming up next in the series on Victorian Homes in California: Heritage Square.