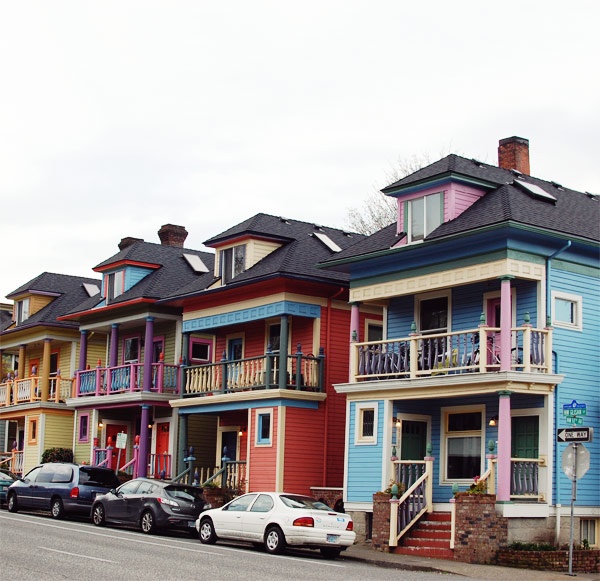 Most Portlanders just know it as NORTHWEST PORTLAND.

Historic Northwest Portland is a charming slice of dense urban living in central Portland. Restored Victorian/Edwardian-era houses, early 20th-century apartment blocks, and pedestrian-friendly shopping streets all come together to produce an urbane atmosphere reminiscent of San Francisco or some of the older East Coast cities. The neighborhood is located immediately west of the Pearl District across I-405, and just north of Goose Hollow across Burnside. Northwest Portland abuts the West Hills to the west, including the magnificent 5100-acre Forest Park. Many Northwest residents feel they have the best of all possible worlds, with easy access to the park’s wilderness alongside the best of urban life too. Commercial streets of Northwest 23rd and Northwest 21st avenue provide a limitless choice of restaurants, coffee houses, stores, and services of all descriptions. Downtown Portland is also just a stone’s throw away. Northwest residents can either walk downtown or take one of the many frequent-service buses that run through the neighborhood. The nearest MAX stop is in Goose Hollow, just south of the Northwest District’s boundary.

The northern boundary of the Northwest District is somewhat open to speculation. The official Alphabet District listing on the National Register of Historic Places designates Northwest Marshall and Northwest Lovejoy as the district’s northern limit. But most Northwesterners think of their district as extending all the way to Upshur and Wilson, the end of the alphabetically named streets of the neighborhood. To add to the uncertainty, the U.S. Postal Service makes no distinction between the Northwest District and that portion of northwest Portland lying over the hills to the north and west. It is all northwest Portland to them. Many a newcomer to Portland has been dismayed to learn that the too-good-to-be-true northwest apartment they had lined up actually lies next to Beaverton!

The bulk of the area in Northwest Portland owes its development to pioneer businessman Captain John Couch (pronounced Cooch). In 1840, at age 28, the already-accomplished mariner from Massachusetts captained the very first sailing vessel into the Willamette River. He returned to the Oregon Territory in 1844 and quickly distinguished himself with successful ventures in publishing and Oregon City real estate. He soon realized, however, that the area’s commercial future would occur not in Oregon City but in the more navigable rough-and-ready pioneer settlement called Portland — so named in a coin toss between Portland (Maine) and Boston (Massachusetts). In 1845 he filed a land claim for one square mile on the west bank of the Willamette River just north of the original Lovejoy-Pettygrove Portland townsite. In 1865 Couch filed the first subdivision on his land covering what today is the area between Ankeny and Kearny Streets. The original street names were letters of the alphabet progressing south to north (A Street, B Street, etc.). A later Couch claim in 1869 extended that subdivision to L, M, and O Streets. The subdivision was referred to as the Alphabet District, and it is that designation that is recognized today on the National Register of Historic Places. In 1891, the city council alphabetically renamed all the letter streets in honor of prominent Portland pioneers and landowners. These designations remain to the present day.

Captain Couch died in 1970 at the age of 59. His wife Caroline assumed the real estate development duties of the Couch family. She is responsible for extending the Couch lands to the west and north into much of what is now Northwest Portland. One of the distinguishing features of these later additions was the large size of the blocks: 200 ft. by 480 ft. vs. the previous Portland standard of 200 ft. by 200 ft. These large blocks soon attracted wealthy buyers who wished to erect mansions on sumptuous grounds. The large blocks also attracted institutional uses (schools, hospitals, churches, etc.) which desired more spacious and healthful environments that could be found in the central city. A number of Victorian and Edwardian-era mansions remain today, often surrounded by only slightly less prestigious homes and apartments of later eras. In its day, the neighborhood was often referred to as Nob Hill after the wealthy San Francisco neighborhood of the same name.

Most early housing in the neighborhood was either Victorian (Italianate, Stick-Eastlake, or Queen Anne), Colonial Revival, Colonial, or Craftsman (including English Arts & Crafts). Colonial Revival houses are the real survivors of the neighborhood. They were spared demolition as the eastern edge of the neighborhood gradually changed to commercial/industrial use. An aerial photograph from 1920 shows many more Queen Anne towers and turrets than exist at the present time. The Colonial Revivals in the photograph, however, can easily be identified on the ground today. One can only surmise that the gingerbread Victorians must have seemed hopelessly dated and doughty to the mid-20th-century mindset. The Colonial Revivals, however, retained (and still retain) a classic appeal as an American domestic archetype. Several new generations have come of age since the Victorian tear-downs. People once again value the Victorians for their intricate beauty and charm. Nearly every remaining Victorian in Northwest Portland has been lovingly restored.

Northwest Portland remained an enclave of mostly well-to-do professionals and merchants up until the Lewis and Clark Exposition of 1905. This enormously successful fair was located on Guild’s Lake — just north of the Alphabet District (filled-in Guild’s Lake is now the Northwest Industrial District). It brought much more commercial traffic and visibility to the Northwest neighborhood. Hotels, apartments, and boarding houses were added to the housing mix. Streetcar service was expanded on lines connecting the fair with downtown Portland. Neighborhood commercial streets started to fill in. Portland’s largest-ever growth spurt occurred between the year of the fair until the First World War. The decade of the fair saw Portland’s population soar from 90,000 to 220,000. After the fair, the neighborhood continued to grow and prosper, partly because of large regional growth but also because the transit infrastructure put in place for the fair increased the district’s accessibility to downtown and points beyond.

Many of the early apartment buildings built in Northwest after the1905 fair catered to the luxury market. In a western American city of single-family homes, apartment living was still slightly suspect. Apartment builders and architects had to provide especially spacious floor plans and luxurious finishes to coax Portlanders out of their single-family homes. These apartments proved to be quite successful, especially with Northwest Portland residents approaching retirement age. Most of these buildings still exist today and command top rents. Some have been turned into highly sought after (and expensive) condominiums.

Northwest Portland experienced another growth spurt in the 1920s when many large apartment blocks were built. Some of these catered to upscale residents, but many more were composed of a smaller studio and one-bedroom units. Single people, young and old, were added to the neighborhood’s mix. Though not necessarily luxurious, these 1920s apartments were well designed and often featured elements of Roaring-Twenties whimsy and pizzazz. Architect Elmer Feig designed 21 large apartment complexes in Northwest Portland. His fanciful facades included elements from Art Deco, Moorish, Mission, and Egyptian designs. And some seem to have sprung straight from his creative mind — devoid of any stylistic precedent.

The war years in the 1940s saw a number of homes converted to flats and apartments as shipyard workers flocked to Portland to aid in the war effort. After the war, the neighborhood lost some of its panache as wealthier families moved to farther flung prestige suburbs, or moved further up into the hills. The widespread American adoption of the automobile in the 1950s accelerated this trend.

Northwest Portland stagnated through much of the 1960s and 1970s. Beginning in the 1970s though, with the founding of the Northwest District Association, Northwest residents began the long task of restoring their neighborhood. Today, the area is considered a prestige area once again, home to many creative professionals who enjoy city life. Many residents also moved here to lead a greener lifestyle. Northwest is arguably the easiest part of the city to live without a car. Most of these residents can afford to maintain a car — they just prefer not to. Indeed, with the best of the city at their doorstep, and the wilds of Forest Park a short hike away, it is no wonder that Northwest residents feel blessed to live in such a special Portland neighborhood.