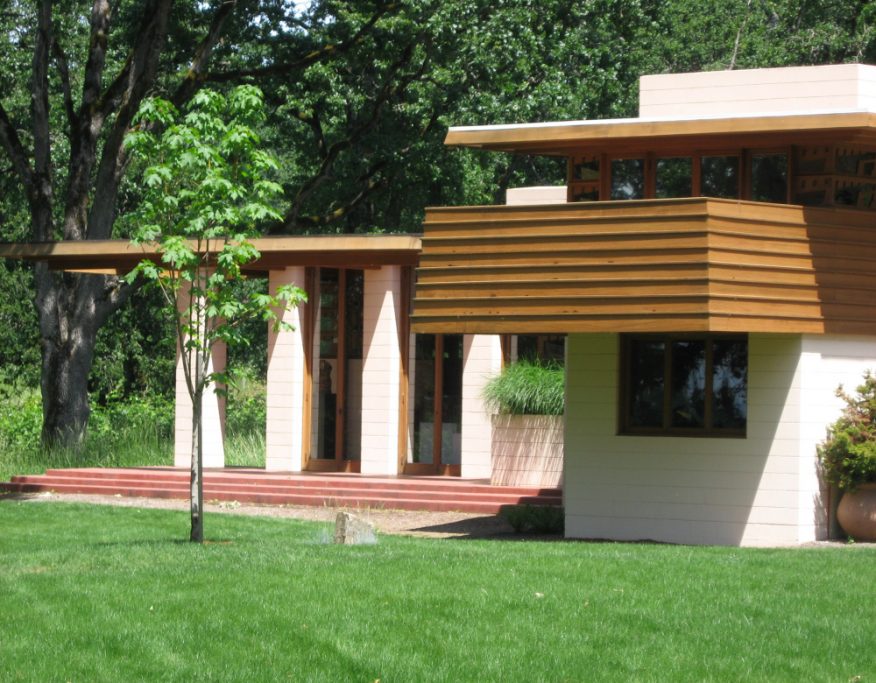 Frank Lloyd Wright (1867-1959) is known throughout the world as the great American architect who designed such icons as Falling Water, the Robie House, and the Guggenheim Museum. His most influential accomplishment may well be his series of small and practical Usonian houses built between 1938 and the 1960s.

Many features commonly found in mainstream home styles of the 1950s and 1960s were first popularized by Wright in his Usonian prototypes: one-story horizontal plans, walls of windows (often opening to a rear garden), open and flowing floor plans, the concept of the Great Room, a dining alcove open to the living area, decks and patios extending interiors into outdoor rooms, radiant heat in the concrete floor, and a carport for the family car(s.)

Usonian was Wright’s acronym for United States of North America. He felt the Usonian house would someday become the prototype of the middle-class American home. While some of the principles of the Usonian concept did find favor in the 1950s and 1960s, others — such as the Usonian’s small size — were quickly put aside in the quest of forever increasing square footage. Now that we have again entered an era of diminishing resources and increased costs, it may be wise to re-examine the lessons of the Usonian house.

In the beginning, the Usonian house concept was a product of the 1930s Great Depression era. These houses were intended to be economical to build. One way to keep the cost down was to limit the size of the house, yet make it appear much larger through clever design. Today’s “McMansions” are perhaps three-to-four times the size of the average Usonian, yet Wright’s houses feel infinitely more spacious and inviting. Other economical features include such common-sense ideas as standardizing building components and utilizing only readily available local materials. In addition, Wright encouraged Usonian homeowners to build at least a part of their homes themselves. This would not only save them money, but, he felt, would help develop a certain spiritual connection to the house.

One way to sample what a Usonian future might look like would be to visit the Gordon House in Silverton, OR. Wright designed this house in 1956, although it was not built until 1964 — five years after his death. The home was saved from demolition in 1994 and was moved to its current site on an oak-studded corner of the Oregon Garden. The restored house is open for tours by reservation, from May through October.

The Gordon House is an unusually fine example of Wright’s talent for creating complicated patterns of beauty by exploiting the interplay of simple natural materials. Concrete block in other hands might have appeared merely utilitarian. In the Gordon House it becomes a thing of beauty. Repetition of simple forms also creates a dynamic feeling of motion.

Alternating heights of ceilings makes the Great Room appear more voluminous and grand than its actual dimensions would indicate. Similarly, lowered ceilings in the bedrooms give a sense of intimacy and coziness. And all around, the magnificent walls of glass provide a connection to the outside world of nature.

Many post-war houses in the Portland area reflect a direct connection to the principles of the Usonian house. The Northeast Portland house pictured below was designed by architect Steven Mayer in 1955. The present owner and her husband built the house themselves, essentially from the ground up. They even hand-built most of their contemporary 1950s furniture, much of it still in use. One must think that Wright would have approved of this hands-on spiritual venture.

Seattle architect Milton Stricker designed the Ridgefield, WA, home pictured below in 1972. Though built late in the Usonian timeline, its features show an unmistakable connection to Wright’s Usonian houses. Stricker was an apprentice of Wright; he went on to design many notable Usonian-inspired buildings throughout Washington and Oregon.

Though the oldest of the Usonian houses are now more than 70 years old, they exude a freshness and futuristic quality that remains appealing even today. With a little effort and modification Usonian houses could be produced once again for a new generation of middle-class homeowners. They are beautiful to look at, wonderful to live in, and they just make sense. What better kind of housing could the future possibly provide?