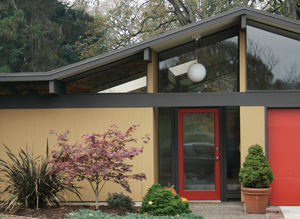 The ending of World War II brought profound changes to this nation culturally, economically, and architecturally. The ensuing baby boom, rising car culture, and new technologies all thrust America into a new era. The mid-20th  century in America would be a time of exceptional growth and expansion.

The generation of Americans that lived through the Great Depression had just won a world war and was looking to the future. Following the war, eager and industrious Americans went to work on building modern neighborhoods for modern families.

The automobile’s affordability and the need for more land made it possible for people to move further from the urban cores of our cities. These suburbs sprouted up around all U.S. cities and became the stylish places for young families to move to. Unlike overcrowded inner-city neighborhoods with two- and three-story houses crammed next to each other, the new modern neighborhoods had large lots and wide streets. This new way of living had far-reaching effects on American architecture. We were stretching out.

What we now refer to as Mid-Century architecture has its roots in several different, earlier styles. These are the Northwest regional style, the international style, and the style of rambling rural ranch houses across the country. Architecture during this time was also influenced by experiences abroad during World War II. Tiki bars and exotic Asian-themed restaurants and lounges were popular in the 1950s and 1960s, with whimsical, colorful neon signs beckoning us to pull in for a visit as we drove by.

This architectural era is from the recent past, but it is still threatened.

The cutting-edge commercial buildings and residential homes from this period are now between 45 and 60 years old: not exactly ancient. And that may be the problem. These structures are middle-aged: not new and efficient, but not 120-year-old Queen Anne mansions.

When the original homes of Portland’s founding fathers were razed, they were mostly middle-aged structures. These homes were architectural masterpieces. Nobody argues that it’s good they’re gone. At the time, the feeling was different, though. They were simply older homes on valuable property. They stood in the way of progress. Most of us now realize that we should have preserved more of these great historic homes. I hope we can learn from our past.

In recent years, I have witnessed a shocking amount of Portland’s Mid-Century architectural history being destroyed. This trend spreads from neon signs on North Interstate Avenue all the way to the gutting of the Chinese Village Lounge in the Montavilla neighborhood. The latter was probably Portland’s most intact tiki-era Chinese-American lounge. It was built in 1949 with bamboo light fixtures and teak woodcarvings throughout the building.

Developers have now completely remodeled the iconic Pagoda restaurant in the heart of the Hollywood neighborhood to house a bank, and the future of the Memorial Coliseum of 1960 (designed by Skidmore, Owings and Merrill) remains frighteningly unsure. Of course, many of the significant private residences, designed by noted architects of the era, have been remodeled beyond recognition.

Learning more about the architects that gave birth to Portland’s modern movement (think: Pietro Belluschi and John Yeon) should give us a better appreciation for Mid-Century Modern architecture. It’s go-time for the preservation of Modern!

We cannot save every building or ranch house from this era. What we can do is to grow a respect and appreciation for this architectural period and its historical significance. American cities (especially Portland) are focusing on density and smaller lots for city and suburban homes, and this is a good thing. What we need to remember is that these rambling homes and their commercial counterparts are no longer being built and will become more and more historically significant as the decades go by.

The Tik-Tok Drive-In is gone, and the Pagoda Restaurant has been remodeled beyond recognition. Let’s leave our descendants more of our city’s earliest buildings and homes. We owe it to ourselves.

Bob Sloan has more than 10 years of experience in old-home restoration and carpentry, and now manages the Architectural Department at Hippo Hardware. Sloan can be contacted at 503-231-1444.