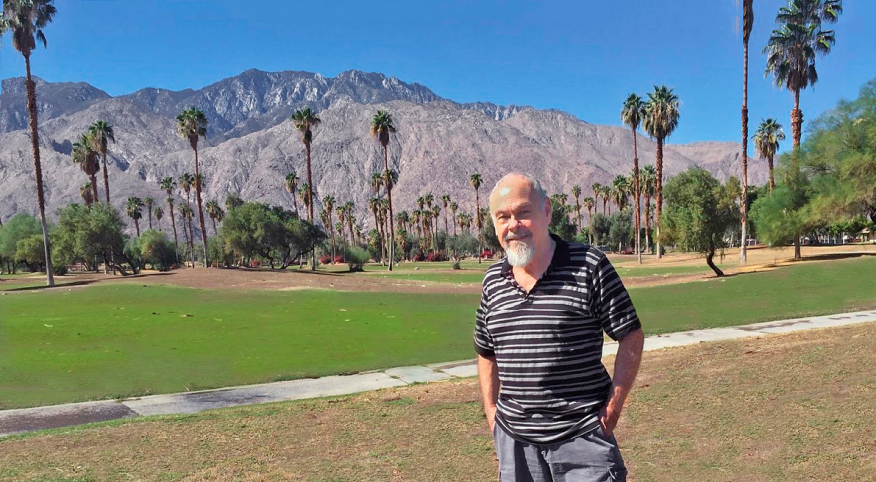 We recently caught up with PAG’s resident Architectural Historian & Preservation Planner, Jack Bookwalter to learn more about his personal history and his lifelong fascination with old buildings. Jack graciously shared his story with us, as well as some very interesting insight into one of Portland, Oregon’s most prevalent historic building styles! Jack Bookwalter has been contributing to the PAG community as an exceptional resource in the fields of architectural history and urban planning.

Though Jack says he is ‘mostly retired now’ he is always generous with his time and expertise and has made himself available to PAG members to help with identification or evaluation of any historic resource in the built environment. Jack’s number one goal is to ensure that accurate historical information is utilized correctly and presented as such to the world-at-large. On the unwavering dedication to sharing his knowledge, Jack says,

“Distributing historic knowledge and information is my ‘hobby’ as it were.” 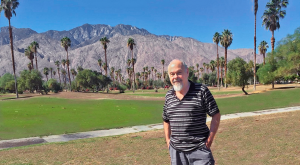 Jack Bookwalter in one of his favorite destinations for Mid-Century Modernism, Palm Springs.

Jack regularly gives lectures and develops programs on historic architectural styles for the Architectural Heritage Center and Restore Oregon. He also serves on the Mid Century Modern Committee of Restore Oregon which puts on a program and house tour each May celebrating mid-century modern design. (Jack was excited to share that the 2018 home tour, to be held on May 12th, will feature the works of mid-century architect John Storrs.)

Also an avid city-walker. Jack Bookwalter frequently leads walking tours of Portland’s historic neighborhoods for the Architectural Heritage Center, Restore Oregon, and for the City of Portland’s 10-Toe Express Walks Program. Jack is always searching out and devising new walks of an informative historical nature and in true Jack-fashion extends an open invitation to whoever wishes to join him:

Jack told us that he has been interested in old buildings for as long as he can remember. Growing up in Chicago with its richness of architectural history provided him many opportunities to learn about the designers and builders of that great city.

After high school, Jack majored in Architecture at the University of Illinois. In his 5th year of instruction, he made the slight shift to Urban Planning, receiving his Bachelor Degree in Urban Planning in 1969 after which e took his first job as a Planner for the City of Santa Rosa, California where he was hired to help design and rebuild a portion of their historic downtown that had been destroyed by a substantial earthquake earlier that year. Later, in 1988 Jack completed his Masters in History at Sonoma State University and was then appointed Preservation Officer of the County of Sonoma where he served as staff liaison to the County Landmarks Commission. Jack tells us that he advised many home and business owners on the best ways to secure approval of their projects before the very historically-particular Landmarks Commission. He also administered a grants program that funneled a portion of the county’s tax money toward historic preservation projects; a position he held until he relocated to Portland, Oregon in 1998.

Once settled in Portland, Jack actively restored an 1886 5-unit Victorian apartment building in NW Portland. that had been heavily “remuddled” (Jack’s exact wording to describe what had been done to the place in the 1970s-1980s). Jack lived in each unit for about 1-2 years, gradually restoring the entire building to an appropriate late-19th Century appearance. He then moved to a 1920s English Cottage/Craftsman bungalow in NE Portland where he still resides today, having restored much of that dwelling as well.

As an architectural historian, one of Jack Bookwalter’s favorite building styles also happens to be one of the more commonly dispersed in Portland. Jack, in true form, educates us on the topic and answers a few lingering questions. In Jack’s own words: 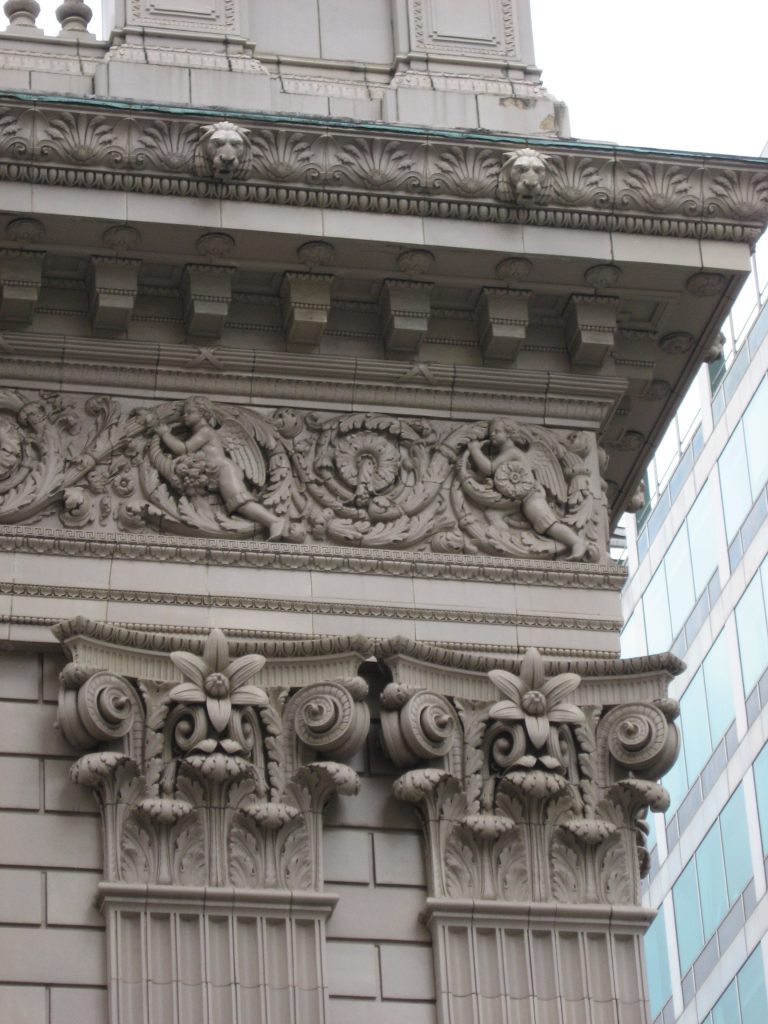 “Terracotta (literally ‘baked earth’) is a ceramic building material that has been around since classical Roman, Greek, and Egyptian times. Terracotta clay is baked in molds in kilns, often for as long as two days. Although it has been used throughout history as a structural building material, we know it mostly in its glazed exterior-cladding form that is sometimes referred to as “architectural terracotta“.

Because terracotta was created in molds, the relief designs on the tile’s surface were limited only by the imagination of the mold-maker. Classical reliefs in the form of garlands, urns, and column capitals were very popular, as were “dentils” and the late Victorian “egg-and-dart” pattern. Other designs harkened to a fanciful King Arthur interpretation of Medieval history. In the 1920s-1930s period, Art Deco terracotta was frequently applied to buildings. But in any time period, many designs contained no historical precedent. They just came from the creative mind of the mold-maker, often working in tandem with the architect.

Terracotta became popular in this country with the development of the steel-framed skyscraper. 20-stories of heavy stone and brick would have been too heavy, cumbersome, and expensive to stack story upon story. But terracotta as a lightweight stone substitute could be mass produced inexpensively and infused with designs resembling intricately carved stone. 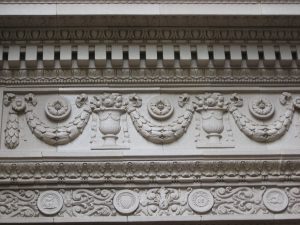 Terracotta cladding on buildings also became popular after the 1893 Chicago World’s Fair great “White City”. White-glazed architectural terracotta could be kept clean and always white and looking new. Many streetscapes in downtown Portland approach the image of the World’s Fair White City. Standing at the corner of 5th and Morrison, looking eastward past the former Macy’s/Meier and Frank Building, presents a streetscape of uninterrupted white terra cotta buildings that would have made Daniel Burnham (architect of the Chicago White City) feel proud.

Why does Portland, Oregon have one of the largest concentrations of terracotta buildings in the country? 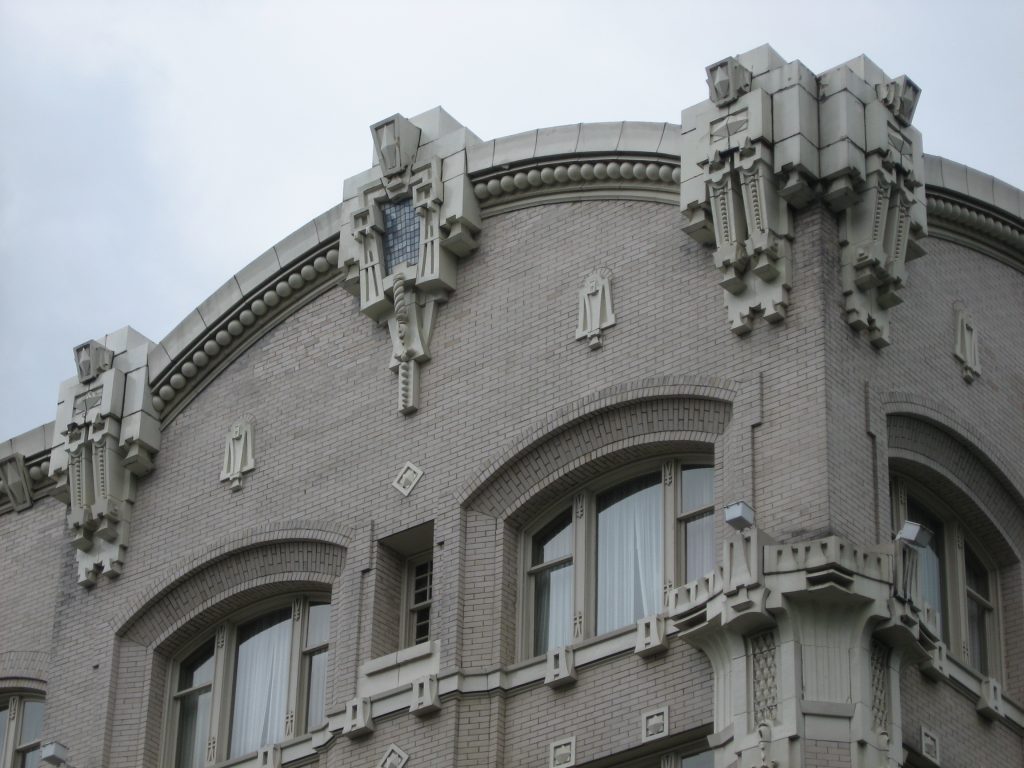 Two reasons: 1) Portland went through a building boom following the Lewis and Clark Exhibition of 1905. The period 1905 to the First World War was also the peak of terracotta’s popularity in the country.

2) Terracotta fell out of fashion in the nation in the 1920s. But not in Portland. The City’s most prominent architect of that era, A.E. Doyle, remained a staunch proponent of decorative terracotta. His many office buildings in downtown Portland continued to use terracotta as a design element, often in creative and innovative ways.

The terracotta buildings in downtown Portland are truly a treasure. Many of the most decorative elements of terracotta tiles are found in friezes at the very top, the cornice of buildings. In our busy world, we seldom take the time and effort to view anything outside our hurried, straight-line paths. But when you are in downtown Portland some time, look upward and you will discover a veritable art gallery in the sky. Once you’ve seen it you will always be looking upward, always discovering bea 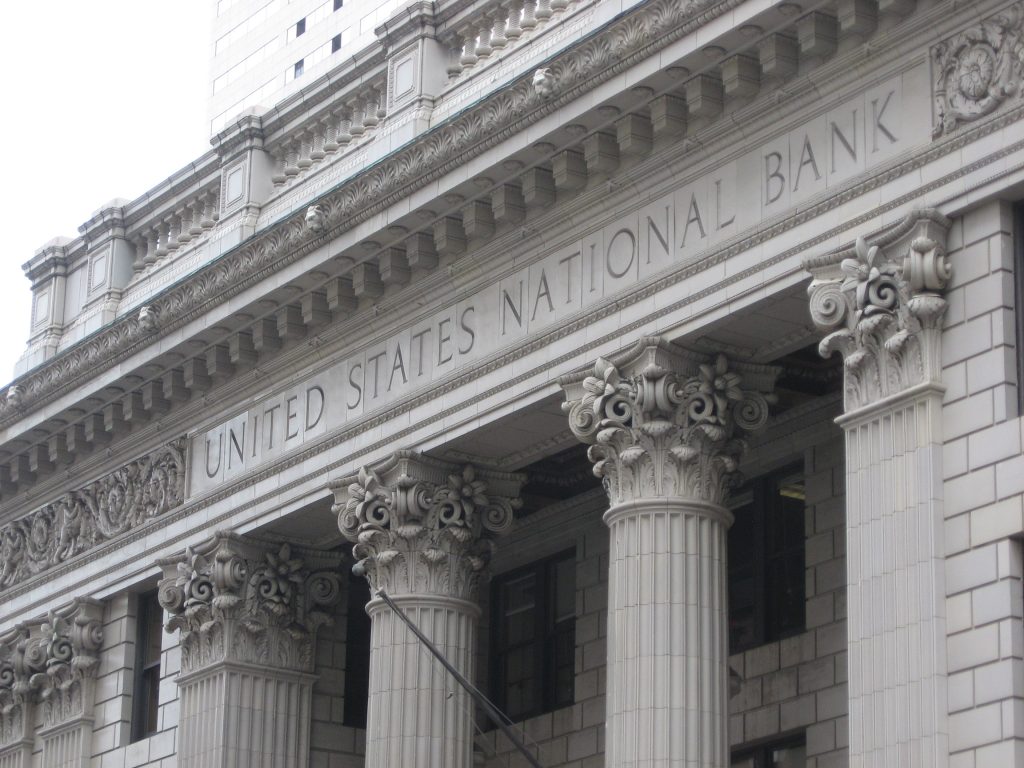 uty in new details that are constantly coming into view as you traverse the sidewalks of our amazing and beautiful city.

As an aside: At one of the terra cotta tours I led for the Architectural Heritage Center, a man approached me with an old photograph of his grandfather proudly standing beside an enormous Corinthian column he had produced at the Gladding Mc Bean terra cotta factory in Lincoln California. The photo was labeled “Portland Oregon”. This man had read about the tour online and decided to make the trip up from Sacramento just to see if he could find that column. Sure enough, we found it on the old United States Bank building on 6th Avenue. (photographs #5664, and #5669). Occasionally, being an architectural historian produces unexpected, gratifying rewards. This was one of them.” 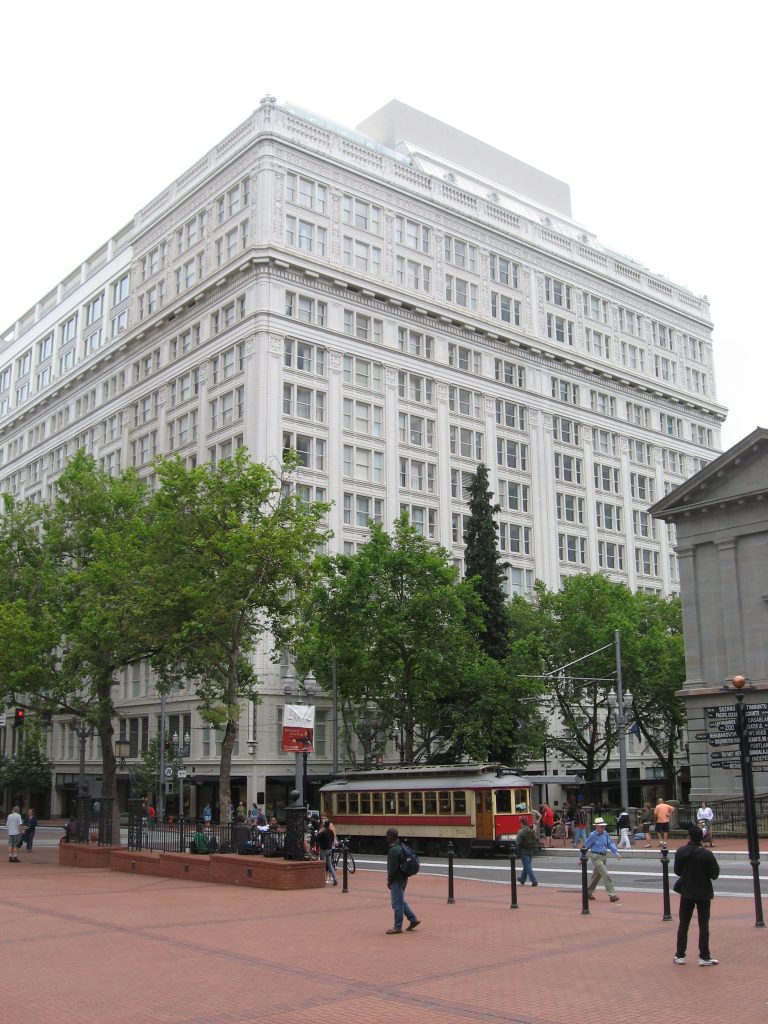 If you’d like to take Jack up on his invitation to walk Portland and learn more about our local architectural history, or if you would like to reach out to him for consulting, you can contact him via email.