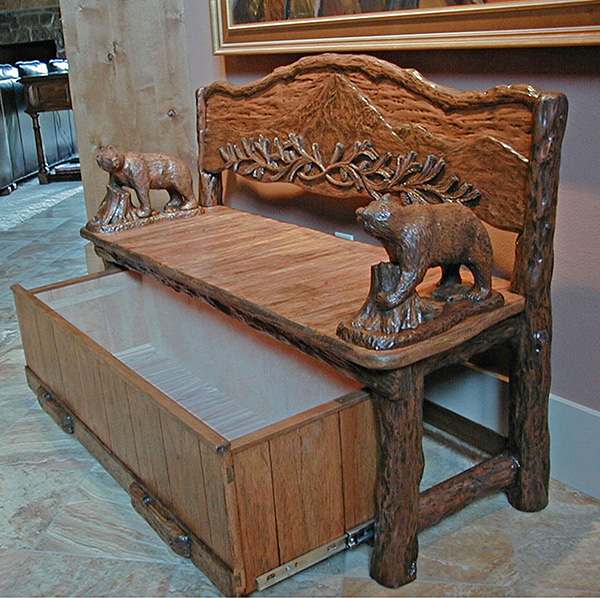 Steve Pancoast refers to himself as an American Master Woodcarver, Woodworker and Designer of the Old World persuasion in a New World. You have to admit, that’s a thoughtfully-crafted title – and it’s a title hard earned and well-deserved. Like his craft and his art, just about everything Steve Pancoast does is thoughtful, meticulous – darn near perfect. 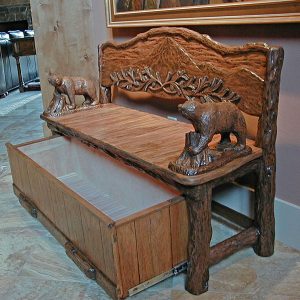 Considering there is no certification for wood carving in the US as there is in other parts of the world Steve admits that it feels to him rather presumptuous, reveling in this self-awarded title. But after nearly 40 years of designing and carving different motifs for various applications Steve passes the ‘certification’ test with the end result. Every single time he takes in a project he is in essence earning that self-imposed certification level of craftsmanship. Steve’s specialties lie in creating custom heirloom pieces as well as repairing or reproducing historic ones. He rarely repeats projects, each one being typically unique. His abilities as a carver and woodworker are diversified at a level only a master could predictably execute. So Steve takes the title, self-proclaimed or not, and stands well-prepared to back it up.

Steve is most often asked, “How did you get started in woodcarving?” And his simple answer is to admit that the talent and inclination came as somewhat of a surprise even to him. With 11 years of construction experience and no real experience working wood, Steve was so inspired by the birth of his daughter that he designed, built and carved an heirloom cradle especially for his sweet, new baby. And that was the beautiful beginning of his career. In a word, Steve says, he didn’t find wood carving… “wood carving found me.” 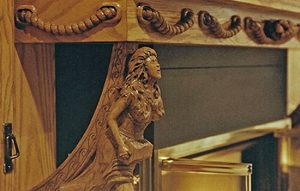 Pancoast’s early training was in Classical European Ornamentation under Master Carver Emanuel Sanchez. He also learned tool sharpening under Master Tool Sharpener Pat Elliot in Denver, Co. They were impressed with the promising talent he showed and arranged an apprenticeship in Bonn, Germany. In preparation, Steve moved his young family back to Oregon so he could study German. Steve became concerned he would get “trapped” in the Classical European style for which he saw a limited need, especially in the Pacific Northwest’s city of Portland. His goal, even in those early days, was to become a master at his newly assumed trade and he knew that focusing on a single motif would hamper not only his ambition and aspiration, but the opportunity for growth within the craft and as a business. Even in 1980 it was apparent that woodcarving was seen as an antiquated trade. Instead, Steve accepted a position in the Red Lion Motor Inn’s Graphic Arts Department which fabricated an array of artistic graphic arts for the motel chain – especially well–known for their woodcarving. Along with the carving Steve was also introduced to the medias of leaded glass, carved glass, metal works, casting and fabric art – all on a commercial art basis. 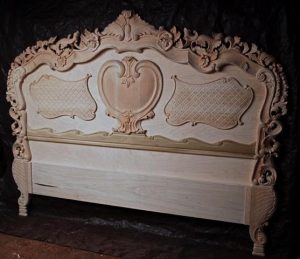 Steve, never one to shy away from growth, then became the lead woodcarver, sign maker, pattern maker and he headed the ‘sculpted fabric’ arts. He also learned to carve glass and with all of these freshly developing skills in tow, eventually became the Head of Graphic Arts Production for the entire company.During those eight years, Steve continued his education by seeking out many of the Old World craftsman that still existed in the Portland area and mining this living resource for all the information regarding their trades, such as antique restoration and finishing methods, that they were willing to offer.

In 1989 Steve became self-employed, opening his Piece of the Wind studio to focus on multi-motif and diversified carving & sculpting, incorporating the creation of privately commissioned heirloom pieces along with more commercial market demands.
Woodworking for woodcarving is a highly specialized craft within itself and Steve soon realized he had to become a competent woodworker in order to in order to make a living. He learned and began to include furniture such as chairs and tables, and architectural elements such as capitals and mantles in his repertoire.

It was also during this time that Steve first met someone he still considers to be one of the finest craftspersons he’s ever worked with: fellow PAG member Nancy Thorn of Gold Leaf Restoration. Nancy introduced Steve to the challenges of historic renovation and conservator work. While antique restoration and conservator work are related, they are two vastly different things that ultimately complement each other. 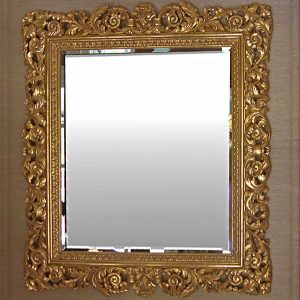 Steve believes it’s this very melding of unique and complementary skills and talents that makes the Preservation Artisans Guild so special and so incredibly important to the world of historical preservation and restoration. “It’s a collection and network of highly skilled, specialized craftspeople unlike Portland has ever seen as a group… prepared to preserve history past, and create history to come.” says Pancoast about PAG, “[The Guild] works to preserve our very vocations and to help keep them alive in a fast-moving, ‘throw away mentality’ society that simply hasn’t had enough time to develop its artistic culture nor learned to embrace fine craftsmanship instead of viewing it as a curious novelty. The value of PAG includes not only preserving and protecting those historical pieces worth saving, but protecting and preserving the very trades capable of creating those rare items made by the human hand and spirit.”

When asked what he sees for the future of the woodworking craft Steve looks back for the answer, as well as ahead, “When I was young I was indeed the ambitious but uneducated upcoming craftsman sucking like a sponge the accumulated knowledge of the older Old World craftsman that still existed then. Now I find they are gone, almost literally, and I now find myself one of ‘the old craftsman’ with knowledge to share and abilities to preserve for future generations. I dare say, regardless a young or old craftsman or artisan, that is a trait we members of PAG all share. It’s more than a job, it’s a responsibility. Like many other artisans of old-world trades and crafts I’ve been replaced with computer-driven tools, offshore resources and the more economical modern design mindset of ‘clean and simple lines.’ This is a sad replacement for imagination and creativity but it requires far less education. The skills of modern craftsmanship are today honed by mastering video games. The knowledge once passed on through apprenticeships by accomplished craftsmen are now artificially disguised as tips found on Google and YouTube. Even so, nothing can replace what can be accomplished by the educated and practiced human hand and spirit. What’s more, those that still have the ability of hand and mind are those that will not only preserve the crafts as they have evolved, but those that will ensure those unique abilities keep our trades and aspirations alive.”