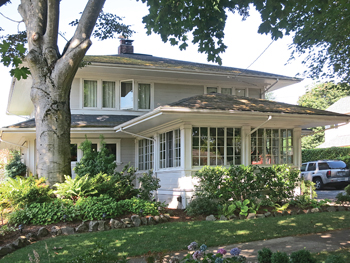 “Prairie” is the name given to a style of house originated by Chicago architect Frank Lloyd Wright around 1900. The first use of the term “Prairie” occurred with Wright’s plan for “A House On the Prairie,” published in the Ladies’ Home Journal in 1901. The term “Prairie School of architecture” was later given to the informal group of architects who practiced in this style. Many of these later architects had worked for Wright himself, or for Wright’s mentor, Louis Sullivan. Although concentrated in the Midwest, a number of Prairie School architects went on to work and live in other cities and countries, spreading the Prairie School philosophy as they went. Today, Prairie houses can be found in virtually every city in the country (including Portland). A distinctive concentration can even be found in Sydney Australia! Prairie houses were at the peak of their popularity from 1900 to the mid-1920s.

As can be seen in the photographs accompanying this article, the most prominent feature of Prairie houses is their wide overhanging eaves. This creates a strong horizontal emphasis thought to reflect the flat, treeless prairies of the American Midwest. The houses’ horizontal lines are further emphasized by rows of casement windows (referred to as “banked” windows), low-slung roofs (usually hipped or pyramidal), and raised horizontal bands on the house’s surface. This latter feature often separates one type of construction material from another — or separates contrasting paint colors.

Prairie houses may be built of almost any material, although in the Northwest, wood (and occasionally stucco) predominates. Prairie houses with porches usually have very thick, squat column supports, furthering the emphasis on horizontality. Another feature found in many Prairie houses is a “porte cochere,” an attached carport that serves as a temporary drop station until the car can be parked in the garage at the rear of the lot. Large concrete planter urns are a distinctive style element used by Wright. Many Portland Prairie houses employ these as well.

Many people consider the Prairie house to be the first truly American house style. It was built as a reaction to the constraints and ornamental excesses of Victorian house designs of the era. Frank Lloyd Wright wanted his houses to be” organic,” reflecting, and appearing to arise from, the prairie sites they were built on. America was the land of the wide-open spaces. Wright felt the American house should reflect the boundless quality of the horizon. The interiors of these houses were likewise open and flowing, not the confining boxed-in floor plans of Victorian houses. Rooms were often separated only by leaded glass dividers. Massive fireplaces and the concept of the family hearth played an important role in most early Prairie houses, though perhaps less so in the milder climate of the West Coast.

Elements of Prairie design were sometimes combined with other styles to create “hybrid” styles with elements of Colonial Revival, Four Square, Shingle Style, English Tudor, Mission, Beaux Arts, Mediterranean, and others. Prairie house purists look askance at these creatures because one of the main tenets of Prairie School philosophy is to have as little external ornamentation as possible. Hybrid styles were often formed by merely tacking-on applied ornamentation to a Prairie house facade. In the hands of a talented architect, however, Prairie hybrids could sometimes reach higher levels of beauty than either of their originating styles.

Portland was fortunate to have the talents of transplanted Chicago architect John Virginius Bennes, active in Portland from 1907 until 1942. As a young man, Bennes had trained and practiced architecture in Chicago at exactly the time that Prairie houses exploded in popularity in that city. He brought to Portland a keen understanding of the underlying philosophy of Prairie design and the rare talent to successfully blend Prairie with other styles. Many Portland architects today consider his Prairie house designs to be among the best-designed older houses in the city (see accompanying photographs with this article).

Prairie houses have continued to influence American house design long after their first surge of popularity at the beginning of the 20th century. In 1936, Frank Lloyd Wright designed his first “Usonian” house, essentially a stripped down Prairie house better suited to the needs of a Depression-weary America (see “Usonian Houses,” Northwest Renovation, May/June 2008).

Wright felt these new houses would revolutionize American home construction in the future. He was partially right. Elements of horizontal Usonian design can readily be seen in many post-war ranch houses. And Wright’s model for the future foresaw the larger lot sizes made possible by freeways and the push to the suburbs. Unfortunately though, in the hands of architects and builders less talented than Wright, the Usonian dream often resulted in little more than cookie-cutter subdivisions and suburban sprawl. Still, many well-designed Prairie/Usonian-inspired ranch houses of the late-1940s -1950s contribute greatly to the architectural history of their communities.

An argument can also be made that Wright’s Prairie/Usonian designs led directly to the 1950s/1960s Mid-Century Modern and Northwest Modern styles, popular today with a whole new generation of home buyers seeking interesting older homes with character. The final chapter of Prairie-influenced houses in America has probably not been written yet. The best may indeed be yet to come.