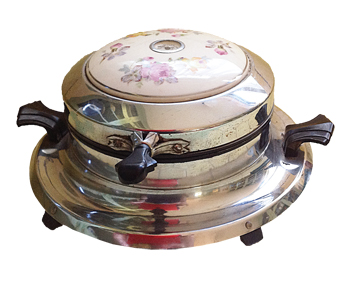 There has always been a blending of decorative arts with functionality in the design of domestic kitchen tools, everything from painted scenes in the glazes of ancient clay vessels to the graceful curves in hand wrought iron kitchen tools. The Shakers, for example, were known for blending simple elegance with form and functionality in a way that parallels that of ancient Japanese artistry.

General Electric marketed the first electric toaster in 1909. It was simply known as the D-12. Of the three versions made, the porcelain version is the most desirable to collectors.

But the 1920s and 30s brought to the domestic scene an explosion of experimental design, as the infrastructure for electricity spread through America. Electrical service had its beginnings in the late 1800s, and in the early 1900s there was uncertainty as to whether or not this new fangled power source was going to be truly reliable. It was common for light fixtures from the early 1900s to be dual fuel (gasoliers that had both gas and electric arms). Just in case the electrical service failed, the tried and true gas would still provide light.

As the 1920s and 30s progressed, electric service became increasingly prevalent. The infrastructure improved and began to reach out from the urban areas and farther into the suburbs, eventually reaching some of the more rural areas as well. There was a push to create appliances to use this rapidly expanding new power source, and everything from electric stoves and refrigerators to electric marshmallow roasters were marketed to the public.

Charles Strite invented the first pop-up toaster in 1919. He incorporated springs and a variable timer into the electric toaster to deal with the issue of burnt toast resulting from human forgetfulness. And so the toaster continued on its progression toward perfection.

With the Industrial Revolution providing more options to those who would have otherwise ended up as domestic help, the lady of the house had to do more herself. No longer was the kitchen the hidden area for the servants. Changes were happening to make the kitchen a pleasant, colorful, efficient place for women to work. There was also a shift during this time to a more informal style of gathering at the table. Appliances were marketed that virtually cooked at the table! These tabletop appliances were designed to be beautiful, as they were front and center on the dining table.

Some of the appliances that were marketed during this time include lovely waffle irons with beautiful porcelain inlays, toasters that had ingenious mechanisms for flipping the toast for browning on both sides of the bread, percolators for making coffee at the table, sandwich presses for making hot sandwiches,and crock pots for slow cooking and serving at the table.

Light fixtures above dining room tables often had an adapter, or even an outlet, for plugging in these tabletop appliances. Gasoliers also sometimes had adaptors for a rubber tube that would fuel small gas appliances at the table.

These early electric appliances had both grace and style, and even after almost 100 years, many of them are still in working order. So consider including these little appliance gems when you are looking to bring a bit of period charm back into your home. They hold a very special place in domestic history.

Karla Pearlstein is a preservation consultant and provides educational resources and consulting services on the preservation and restoration of historic buildings. Contact Pearlstein at 503-452-7772, or visit www.restoringhistory.com.