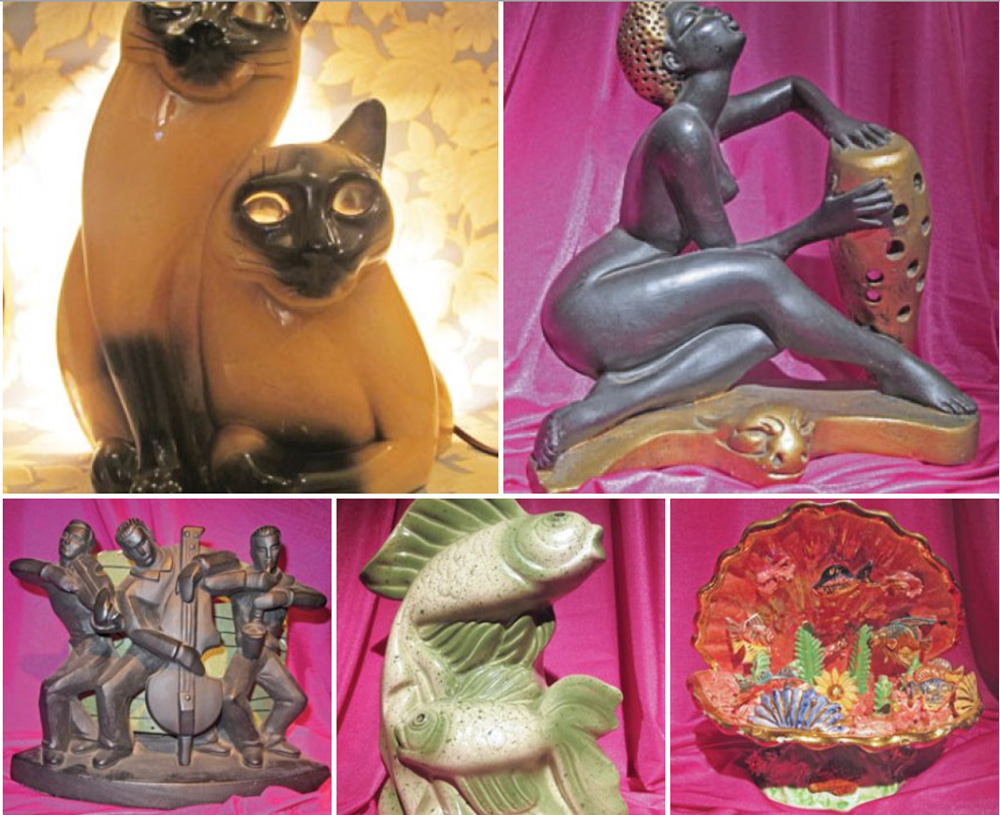 Gone are the large, boxy TVs, replaced by wall-mounted flat panel screens and mobile devices. Young people have no memory of the large furniture-like TV sporting a black and white screen, with only ABC, CBS, and NBC as the program options, or the heavy “clunk, clunk, clunk” as the dial was turned between them. Nor do they have memories of the “TV Lamp” that could often be found glowing above the TV, as the screen below flickered in shades of gray. 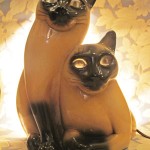 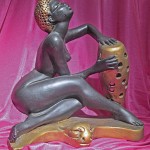 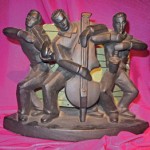 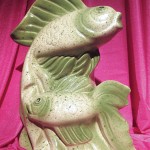 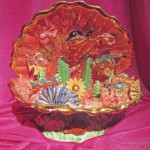 So what were TV lamps all about? Why did they come in so many kitschy and bizarre forms? What is their story, and how can we appreciate them now? Let’s take a look and see if we can answer some of these questions.

The TV lamp was preceded by the “radio lamp.” The company most closely associated with these lamps was Radio Lamp of America, which operated out of Chicago, IL. This company combined a table lamp with a small radio that was designed into the base. The radio was a tube radio and the base had the dials to control the radio component. Other companies made radio lamps that did not have the built-in radio, but were novelty lamps that sat on top of the large console radios. These radio lamps were most popular during the 1920s and 30s. Many of the early radio lamps sport a round shade, now referred to as a “brain ball” because the texture of the glass resembles that of a brain.

It is hard to know if the advent of the TV lamp was simply the clever remarketing of leftover radio lamps that then morphed into their own genre. TV lamps were used similarly to the radio lamps that preceded them. However, a new spin was employed to market the TV lamp. The dim glow of the early black and white screens was considered a health hazard to the eye when viewed in a dim room. There was concern that the difference in lighting between the screen and the darkness of the room would harm the eye. So in order to reduce strain on the eyes, it was highly recommended to have a lamp on top of the TV to provide some vision-sparing ambient light. And Waaaaa Laaaaaa! A new lighting industry was born! But let’s not get ahead of ourselves. Let’s look at how TV came to be and how it influenced the creation of TV lamps.

Although television was initially introduced to the U.S. in 1928, it was very new and experimental. Called a “Radiovision,” it was only capable of displaying black and white silhouettes, and it had no sound. In 1930, Charles Jenkins demonstrated the first commercial on TV in New York. He is credited with transmitting some of the earliest images.

TV technology was on the cutting edge and was extremely expensive. Most people did not have TVs yet. Broadcast technology continued to improve, and the 1940s ushered in early color technology, with color TV introduced to the U.S. in 1951. As with all technology, over time the color TVs became increasingly affordable to the middle class. In 1954, baseball’s World Series was first broadcast in color, and by 1959 shows such as “Bonanza” were available in color. In 1962, cartoons such as “The Jetsons” and “The Flintstones” were also broadcast in color. And with this boom of TVs becoming regular fixtures in American livingrooms, so came the TV lamp that protected us from the serious danger of glowing screens in dimly lit rooms.

The earlier TV lamps were often cast in plaster. But as time moved forward, into the 1950s, glazed ceramic became the primary material used for TV lamps. With the rapidly expanding middle class demand for TVs came a plethora of companies that made and marketed TV lamps. Maddux of California, Kron, Lane, Buckingham Ceramics, Claes, and Gilner were just a few names of the various manufacturers making these novelty lamps. But there were many, many unmarked TV lamps that were made by now-unknown manufacturers.

TV lamps were often quirky, kitschy, and whimsical, and reflected the imaginations of both their creators and of the buying public. The spectrum of styles and forms was wide indeed, ranging from sleek Art Deco-inspired panthers, horses, gazelles, birds, cats, dogs, fish, boats, ballerinas, Asian themes, African themes, botanical themes, and just about anything else that could be thought of. Some of these lamps included a small planter to bring in some natural flora to compliment the ceramic fauna being represented.

So now that technology has changed how we view TV, what relevance does the TV lamp hold for us? For those who have a Mid-Century Modern home, a period appropriate TV lamp can give just that right detail to help capture the essence of the time. For those who don’t have a Mid-Century Modern home, a TV lamp can provide a touch of quirky ambiance to any room. A fish lamp might provide just enough light in a bathroom to help a guest find their way in the night without having to turn on a harsh overhead light. A bit of ambient light in a bedroom might make a guest or a child feel a bit better in an otherwise dark room. A TV lamp can give a room some decorative interest that reflects humor, whimsy, and maybe the lighter side of your personality. Have some fun with these kitschy, quirky pieces of functional vintage art for the masses.

For those interested in learning more about the makers of vintage TV lamps, the relative rarity of these lamps, or where to find amazing TV lamps, there is a great website devoted to them: www.tvlamps.net.

Karla Pearlstein is a preservation consultant and provides educational resources and consulting services on the preservation and restoration of historic buildings. Contact Pearlstein at 503-452-7772. For more information, visit www.restoringhistory.com.