Untouched Victorian bathrooms are exceedingly rare, with 1920s and 1930s bathrooms and kitchens in the next-rarest category. It’s more common for 1940s and 1950s bathrooms to survive. But now, even bathrooms and kitchens of the Mid-Century Modern era are being ripped out at an alarming rate. The marketing drumbeat to continually remodel, to “make it personal” drones on, even though the original fixtures represent a blend of both historic beauty and functionality.

The Victorian bathroom ranged from very simple to quite elaborate. The Sanitary Movement, with its recognition of disease carried by germs, coupled with the new technology of running water and pipes for waste water removal, made bathrooms quite a progressive status symbol. People of more modest means might shoehorn a bathroom with just a sink, bathtub, and toilet into a retrofitted closet. Often, there was just one bathroom in the house, unlike today when there is the expectation of multiple bathrooms. 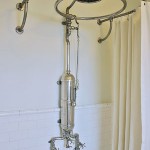 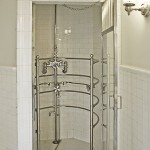 For those of more means, the bathroom of the early 1900s took on more of an elaborate nature. These bathrooms were often spa-like, with tubs for soaking, cage showers with multiple spray heads, such as kidney or toe sprays, a bidet, and sinks with arching faucet heads for hair washing and other such luxuries. A surviving example of this early type of bathroom can be seen at the Pittock Mansion*. Few of these early bathrooms (or kitchens) survive today outside of house museums.

The amazingly large homes and their elaborate multiple-fixture bathrooms were not as common following WWI. But the democratization of the bathroom flourished, even though it was in a more modest form. The bathroom of the “common man” generally consisted of a wall-hung sink, a toilet, and a combination tub-shower. The concept of bathing every day was marketed to the masses and having a bathroom was a way of elevating one’s social position in society. Outhouses and chamber pots were increasingly out of style.

In 1911, Kohler came out with a single cast tub that eliminated seams, legs, and other dirt-catching crevices. Although claw foot tubs were still extremely common, this one-piece tub revolutionized bathroom design, with tubs increasingly built into corners or alcoves rather than as a stand-alone fixture.

Faucet finishes began shifting from nickel to chrome during the late 1920s and early 1930s. And while there were still plenty of hot and cold taps, mixed faucets were becoming increasingly common, with their central spout and the hot and cold handles to mix the water temperature as it exited the spout. 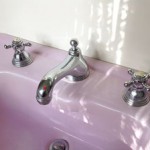 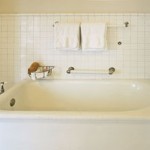 Up until the late 1920s, bathroom fixtures came almost exclusively in white. It was the optimum color for sanitation and keeping things clean. But as the Sanitary Movement started to recede into history, the late 1920s brought a new era of vibrant colors into the bathroom. There was a shift in focus from hygiene toward beauty, with the realization that one could have both. Bathroom fixtures could be ordered initially in pastels, and then progressively in more striking colors, such as Ming green, royal blue, or orchid. White was, no doubt, the most common choice; but for those willing to be adventurous in their bathroom fixtures, there were numerous options. The colorful options continued into the 40s and 50s. Mamie Eisenhower pink was very popular, as were pastel blues, and even yellows. Bold magenta or black could be ordered as well, right up into the 1960s.

When it comes to period plumbing and fixtures, there is just so much history reflected in them. They serve not only as functional elements of a home, that have been used every day for decades, but they also reflect important aspects of history. It is a shame to tear out these lovely historic fixtures, as they are becoming increasingly irreplaceable. Historic plumbing is harder to find, as so much of it has already been lost. So if your house still has its original bath fixtures, treasure them. If you’re looking for historic fixtures, there are limited reproductions found through resources in Portland; see the list below.

Karla Pearlstein is a preservation consultant and provides educational resources and consulting services on the preservation and restoration of historic buildings. Contact Pearlstein at 503-452-7772. For more information visit, www.restoringhistory.com.
*The Pittock Mansion was built in 1914 by Oregonian newspaper publisher Henry Pittock and his wife, Georgiana. Many would say that it is the grandest of the great homes of early Portland. In 1964 it was purchased by the city and, after an extensive 15-month renovation, opened to the public in 1965.
It has remained a community landmark ever since.